I jump on a Palestinian bus at 6:50 AM. Although I had grabbed a handful of change before leaving my Tantur room, I am a tad-bit short. The Palestinian bus driver, though, waves me to the back of the bus. Nice guy!

At the Damascus Gate bus station, I walk in the direction of St. George’s Cathedral, the main Anglican church. I with five others attend the Morning Prayer/ Eucharist service which is in English. Despite seeing only six of us at the service, I know that I’ll be surrounded by thousands later in the day.

The Palm Sunday procession starts at 2PM. That morning to prepare, I grab an overpriced breakfast. Then I locate Ecce Homo, where I’ll be spending Thursday-Monday. Around 11 AM, I begin wandering more purposefully toward the “Church of the Donkey,” Bethphage Church on the other side of the Mount of Olives. Since the Wall has been built placing Bethany on the Palestinian side, the procession starts at Bethphage.

I sometimes have fun getting intentionally lost. Because I can see several churches and monasteries on Mount of Olives and I suspect that there are as many on the other side that I don’t see, I simply walk. Along the way, I bend down and pick up a palm branch to carry. I follow one narrow road up the Mt. of Olives. I follow a Roman Catholic priest since surely he knows the route. Unfortunately, he ducks into a church. In the distance, I spot a Roman Catholic sister. I decide to “keep an eye on her” since surely she knows the way.

I pass the Church of All Nations, sometimes called the Church or Basilica of the Agony, as well as the traditional Garden of Gethsemane with its 2000-year-old tree. I pass two Jewish cemeteries overlooking the Old City. A handful of ultra-orthodox Jews are praying in front of a particular tomb. I look over the Kidron Valley to Suleiman’s Ottoman city walls, the Temple Mount with the beautiful Dome of the Rock, and the multitude of church and monastery spires.

I lose sight of the sister. At the top of the Mount of Olives, I pass a French church, Church of the Pater Noster. I can only peek inside because a special service is almost ready to begin. I decide to continue down a street that remains on the Mount of Olives rather than descend the Mount of Olives’ other side. This decision turns out to be a mistake. I go past a small park with Palestinian children on a swing set and an old man reading a newspaper. I see buses in the distance so I think to myself “I’m on the right route: those are tour buses.” I pass dozens of men and women entering and leaving a hospital. All I can make out in an old faded sign are the words  “Charity Hospital.” Walking a few more blocks, I begin to realize “I don’t see anybody else carrying a palm branch.” I look at the buses more carefully; they are public buses.

I finally stop to ask a fellow at a convenience store. I hold up my palm branch and ask “Palm Sunday procession?” The fellow points back down the street toward the French church. Back I walk. This time I descend the Mount of Olives. 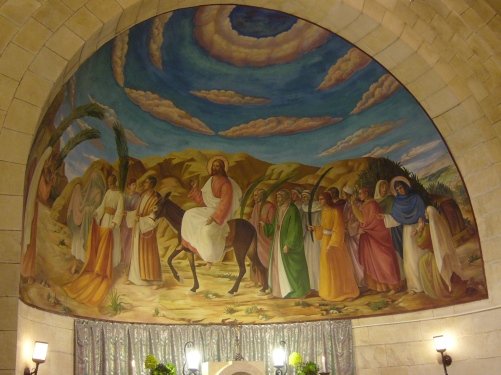 I reach the “Church of the Donkey.” Since it is around 12:30 PM, the small church is full but the two courtyards are fairly empty. I mill around taking photos. Within half-an-hour, streams of people begin entering the courtyard. There are the yellow or red or blue “hat-distinguished” tour groups. There are gray or black dressed Roman Catholic sisters; there are the black or white-robed priests; there are brown-robed Franciscan friars, the Latin Custodians of the Holy Land sites. There are the young Catholic scouts or youth groups representing various local Catholic Churches. There are many like me, individuals or couples taking-in all that is around us.

Of course, there is the Israeli police and military. Five or six blue police officers direct the crowds in front of the church; two other groups station themselves at either end of a street blocking vehicle traffic; a dozen heavily armored SWAT team members stand at a distance; and on a roof overlooking the route, two armed soldiers constantly scan the crowd. Not everybody is here to take part in the procession! These police do an effective job patrolling the area. After telling four or five Palestinian children to get off the street, they take their Palestinian flags and push them to the sidewalk. An old enterprising Palestinian man dressed in his robes and escorting a donkey is also told to leave. The police escort him to some stone steps leading down the hill. Not everybody is welcome.

As a singer amps up his “Hosanna,” I can tell the procession is ready to start. The crowd moves toward a large gate. I can’t see who in the Roman Catholic Church leads the procession; however, I do see Franciscan friars and then a dozen flags being carried by young Catholic Scouts. Within minutes, a very loosely organized crowd of people surge through the gates. We are off! This is definitely a grassroots affair. Whatever respected dignitaries led the procession, the procession is not “theirs.” This is a procession for the common folk, not the religious elite.

We follow broad streets and narrow alleyways. We move forward at a good pace; we stop and wait for a minute or two. It is an unpredictable procession. Some groups sing solemn hymns; other groups with trumpet, saxophone, flute, and drums have a livelier music. Some in the procession walk quite pensively; others are smiling and talking with friends and strangers. Nobody passed out any instruction sheets for this procession!

While we are an interesting group, I enjoy watching those who are watching us! In the upper courtyard of the “Church of the Donkey,” a much younger, modern day Zacchaeus, perched on a fence before he is told to climb down, peers at the rest of us standing outside the actual church. Other kids hang from railings watching us. Older women sit on stone steps watching us pass. Of course, there are dozens of people taking photos of us. I can’t resist taking photos of them! 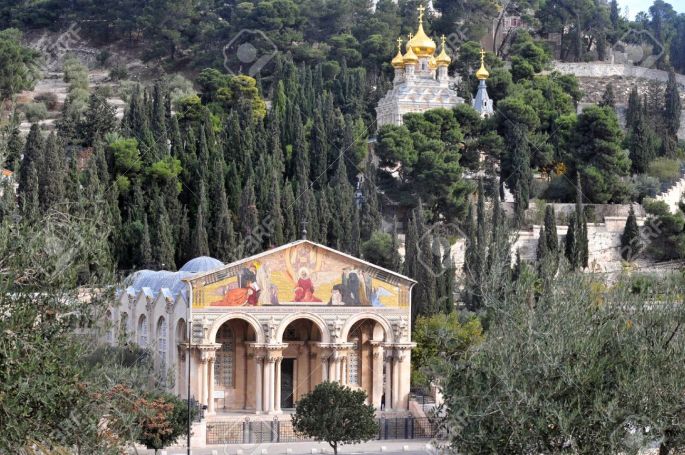 As the procession nears its end at St. Anne’s Church inside the Old City, the bells of the Russian Orthodox Monastery and another church ring. While I’m not sure if they are louder than any other bells I’ve ever heard, the bells certainly create an effect. In talking with other Tantur folk later, all agreed that chills ran up and down our spines as we heard the loud and beautiful bells.

What is the effect of such a Palm Sunday procession? I thoroughly enjoyed walking in such an unorganized procession. I thoroughly enjoyed the “electricity” in the crowd. I thoroughly enjoyed passing “holy places” associated with the life of Jesus. Yet, when I entered the Old City, I passed by stalls selling water and souvenirs. Within minutes, I began to hear the Muslim call to prayer. I thought to myself: “Welcome to the modern world. All sorts of secularity and sacred mix, especially in Jerusalem.”