During my sabbatical, I’ve asked various individuals the question. “If you could stand in front of my students, and if you had only three minutes, what would you say to them?” I’ll certainly pass on the words from four individuals who have lived and experienced Jerusalem life. 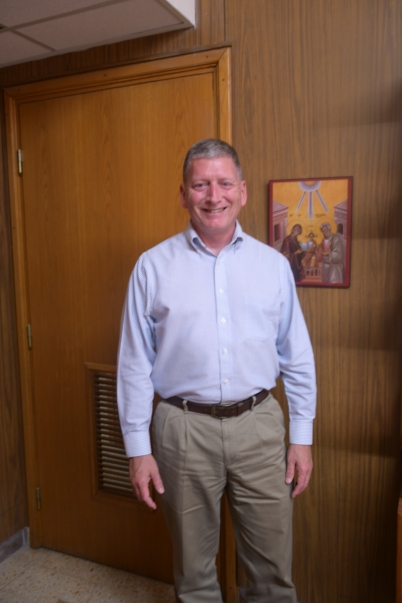 As a member of the Congregation of the Holy Cross (CSC, Father Russ served in Africa for fourteen years before becoming the Rector of Tantur Ecumenical Institute. His words to my students were pastoral and pedagogical: “Trust in the basic goodness of others. Expand your horizons by learning about other cultures and traditions. Don’t demonize others.” Father Russ has seen people change as they visited and studied at Tantur “They often come with sympathies for one side [of the Israeli-Palestinian conflict]; they grow to develop sympathies for the other side. “ As we discussed the situation in Israel, Father Russ commented: “All have stories of victimhood. Of course, it is possible for a person or a community to be both a victim and victimizer.” Father Russ concluded: “It isn’t easy to hope, but like the conviction from the Jewish tradition ‘that at any given time there are 36 righteous men whose good deeds keep the world from falling apart’ there are good people working for peace here and now.”

I also asked the question to John, a member of the Bruderhof. Community which is a nineteenth century Christian communal movement. Tess, his wife, and he have been at Tantur for almost 18 months observing both the good and the bad of contemporary Israeli life. When I asked John the question “If you could stand in front of my class for three minutes it was 3 minutes in your intro and speak to them, what would you say?” John took about two seconds and quickly responded “Words create worlds.”

John paused and then continued: “At the synagogue that Sabbath, the rabbi sensed a different atmosphere. The congregation was looking at him strangely, skeptically. He didn’t know why. After the service, the young man came up to him, ‘Why did you steal from our village’s poorest man?’ The rabbi realized that this was the source of all the strange looks. ‘You don’t know the whole story. The man did something very bad. I forgave him. In gratitude, the man said that I can take a piece of fruit without asking whenever I want one.’ The young man responded: ‘Oh, I’m so sorry. I’ve made such a serious mistake. What can I do to make amends?’”

John stopped, and then continued the story after we crossed a busy intersection. “The Rabbi thought for a moment and then said: ‘Here is something simple that you can do. Go to the highest rooftop in the village with a pillowcase. When you reach the top, cut open the pillowcase.’ Since these instructions were very different from what he expected, the young man asked: ‘Is that all?’ ‘No,’ the rabbi said. ‘Then go and pick up all the feathers!’ The young man responded: ‘That is impossible. They’ll be everywhere, all over the village.’ The wise, old rabbi responded: ‘So are the words once they’ve been spoken.’  For John, the story reinforces his point that “words make worlds.” Besides these words of caution, John would say: “Follow your own conscience. Listen to your conscience telling you the good things to do.”

I asked the question to a third friend, Stephanie, a professor at a Palestinian university. Stephanie said: “Oh, I can picture standing in front of your students since that is what I do all the time.” Stephanie’s words were also quick: “Be hospitable. Know that others are hospitable also.” Stephanie described her Palestinian students as having embraced the value of hospitality. Motivated by the conviction that the “the guest brings blessings,” her students feel as they are to care for any and all guests, and ask nothing of the guests in return. Stephanie recounted an old Palestinian tradition: “One should not even ask a guest his or her name for three days!” Some of her students have learned the Biblical story of Abraham who showed hospitality to three strangers, not aware that the strangers were “angels in disguise.” While showing hospitality may be a blessing, the sense of obligation is so immense that it can be a blessing.  Stephanie elaborated her words by describing the emotional world of her Palestinian students. “Because of the extended belong to family, kin, and friends, Palestinian students feel as though ‘they carry the village on my back.’”

My final question was to Raanan, an Israeli citizen who was born in Vancouver and lived much of his life in San Diego. Affirming his Jewishness led him to work for peace in Israel. What would he say to students? “Learn about conflict. You have to go to the area of conflict; learn there. You can’t learn what it feels to be in a conflict simply from books.” In the course of his peace-making efforts, he has formed many acquaintances that cut across the typical division lines in the quest for Israeli-Palestinian peace. He has practiced what he preached even though it hasn’t been easy.

I learned that this basic rhetorical question “what would you tell my students?” led to more than rhetorical answers. The words from each of my four friends came from their own deepest thoughts and concerns.