While walking the Camino across northern Spain, I became conscious of three powerful images of St James: St. James the Apostle, St. James the Peregrino, and St. James the Moorslayer. Apart from any actual historical identity and significance, people through the ages have obviously used the figure of St. James for various purposes.

St. James the Apostle is certainly the most basic. He is found on church and cathedral doorways, on altar screens, and on paintings of the twelve disciples. Today, many Christians believe that his remains reside in a reliquary below and behind the altar in Santiago de Compostela. Of the early apostles, two others inspire such claims, St. Peter at Rome and St. Thomas near Madras, India.

The Gospels always depict the identity of James the Apostle as a character interacting with Jesus. Within the Gospel stories, James is identified along with his brother John, as “the sons of Zebedee.” In his identity as James the Apostle, the gospels always depict him as a character interacting in a secondary way with Jesus, the primary Christian character. These Gospel stories identify James, along with his brother John, the “beloved disciple,” as the sons of Zebedee and Salome. To distinguish him from James, the brother of Jesus, and James Son of Alphaeus, this James is referred to as “James the Greater.” James and John were among the first that Jesus called to be disciples. James is one of three disciples present at Jesus’ transfiguration and Jesus’ final hours at the Garden of Gethsemane. In the book of Acts, James is mentioned as the first apostle to be killed, in this case by Herod Agrippa. Although no words are attributed to him, he has a ringside seat at these important moments in Jesus’ life.

After the death of Jesus, James is linked to both Spain and Jerusalem. According to a twelfth-century text, Christian legend claimed that James traveled to Spain after Jesus’ death. There he preached and healed persons as he introduced the Christian faith. Returning to Jerusalem, Herod Agrippa had him beheaded. Armenian church claims that he was beheaded at the site of the present St. James Cathedral in Jerusalem. While Roman Catholics believe that his body was returned to Spain by two of his followers, Armenians believe that his heart is buried under the altar of a chapel at Jerusalem’s St. James Cathedral.

The use of St. James as Apostle grounds the Christian essence of the Camino, “the Way of St. James.” Thus, the route to Santiago is different from Christians traveling to an important Hindu religious site such as Varanasi or important Muslim site such as Mecca. 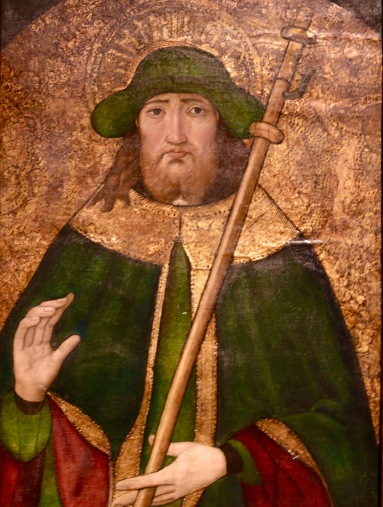 St. James the Peregrino becomes a distinctive image for the Camino. In the depictions of St. James as the Peregrino or Pilgrim, he wears a cloak, a wide-brimmed hat, walks with a staff, and carries a gourd to hold water, and a scallop shell. Interestingly, unlike contemporary peregrinos, the earliest pilgrims could wear the scallop shell only after they had completed the pilgrimage. Today, many peregrinos purchase one before beginning their pilgrimage. In either case, the scallop shell is a marker for pilgrims.

St. James the Matamoros, the Moorslayer, is currently the most controversial image in our social and political context. According to legend, St. James appeared to Charlemagne against the Muslim Moors at the supposed battle of Clavijo which occurred in 833 according to ancient accounts or in 844 according to later accounts. Outnumbered by the Moors, Charlemagne saw St. James on a white charger cutting down Moors with a sword. As a helpful rallying cry, “Santiago, y Cierra, Espana!” “St. James and strike for Spain,” Spaniards, and other Christians later, historically used this image in aiding them in their many battles.

The image, like the other images, is prominently displayed. A large statue overlooks the plaza in front of the Cathedral of Santiago de Compostela’s western “Door of Glory.” It also is found as a stand-alone sculpture in numerous churches.

I don’t know if any neo-fascist or anti-Muslim groups use this symbol today against Muslims. Individuals and groups could adopt it. Apparently though, Spanish police are an obvious presence in Santiago de Compostela. They are worried that Muslims might see the Cathedral and its association with this symbol as an appropriate site to attack and incite fear.