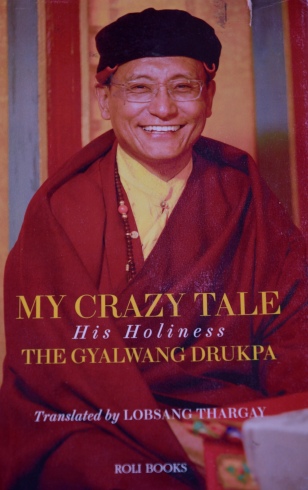 I’m browsing the Leh (India) Tibetan guesthouse bookshelf. I don’t know why, but I count the number of books. There are twenty-two books including Robert Pirsiig’s classic counter-cultural text Zen and the Art of Motorcycle Maintenance, Jane Austin’s  Victorian novel Mansfield Park, and Enid Blyton’s Hardy-boys inspired  childrens’ book The Five Go Adventuring Again. I also came across His Holiness The Gyalwang Drukpa’s book My Crazy Tale. I, like other non-Buddhists, know the Dalai Lama and Thich Nhat Hahn, but who is Gyalwang Drukpa?

As I do with many books, I look at the table of contents, and then I thumb through the pages. The table of contents doesn’t answer my question of Gyalwang Drukpa’s identity, but it does catch my attention because of the various chapter titles. Apparently, his work isn’t the usual memoir; instead, the book is a collection of his thoughts and writings requested by some of his followers. He writes: “This book is a collection the explanations I have given about my life story entitled My Crazy Tale. At the request of my disciples, I have given them the permission to publish it. I hope it will serve as an entertainment for the readers.” He has a sense of humor! Thumbing through the pages, I pause at a more striking collection of photographs.  I’ll say something about those photographs later.

As I read the book, I can tell that he has a clear sense of his purpose. He was “recognized as a guru born for the welfare of others (362).” All of his work is to build and lead the Drukpa branch of Tibetan Buddhism, especially as he builds the life of gurus and young monks in various monastic settings. After finishing the book, I could not help but be impressed by his commitment to the Sangha registers on every page. It is these young monks and the Sangha who will enable Tibetan Buddhism to continue. 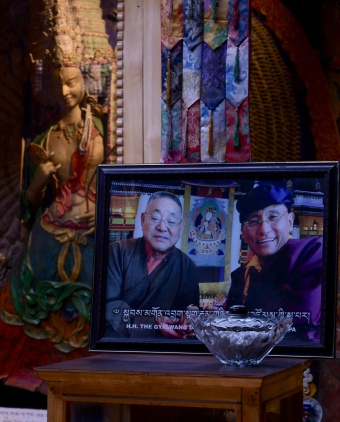 Because the monastics are the real audience of the book, it takes me awhile to understand his style of writing. In the first pages of the book, he writes: “Until and unless we get a spiritual teacher, a guru or a master to show us the right path, we will cling to the illusory phenomena as the truth, and be bound in an endless cycle of attachment and aversion (29).” Being a fairly standard justification for the role of spiritual teachers, his very first chapter “Invocation,” dissects some of the components of a spiritual teacher-student relationship. I find his list of important questions  interesting, but a bit foreign to me: how to check a guru before following a guru; how to distinguish between a guru of lower vehicle, Mahayana Buddhism, and others; how following the qualified guru leads to the internal guru; how to detect a false guru; how one needs to develop an understanding of the thoughts of the guru; how Gyalwant Drupka himself owes deep gratitude to his guru Ontrul. Since the questions are about unusual topics, I keep asking why are these the topics of the first chapter? Eventually, I realize that the Tibetan Buddhist monastic tradition prioritizes the relationship between a student and his or her guru. Rather than simply imparting information or skills of reading classic texts as I may do in my university classroom, the guru helps shape the personal qualities of the student. The relationship is much more demanding and involved. Furthermore, in addition to helping the reader understand the importance of gurus in general, Gyalwang Drukpa is placing himself in a long tradition by recognizing his own guru Ontrul. This placing himself in a tradition continues for many additional pages where he praises all of the other personal teachers he has had. In so doing, he illustrates that in Tibetan Buddhism, a student becomes part of an unbroken line of gurus, of rinpoches. This practice contrasts to our western traditions. I hang my qualifications on the university which granted my degree. While I and others personally appreciate our professors, we haven’t been shaped by them as persons to the same extent. 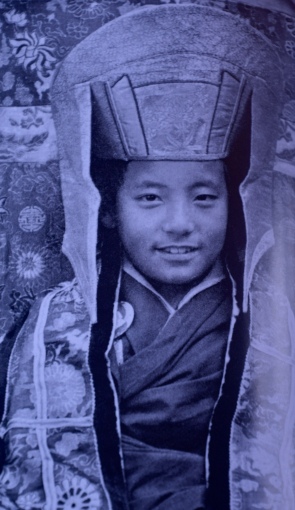 My Crazy Tales is not a biography or memoir in usual ways. While there is a very loose chronological principle to his work, he doesn’t make it easy for the reader. As with other memoirs, I assume that he’ll begin with his birth and describe his parents and surrounding family. On what page do I learn the date of his birth? On page 115, he discloses that he was born on March 5, 1963. One-third of the way through the book! Why so far into the book? The third chapter, “Blessings of the Lineage: The Origin of the Drukpa Lineage” gives us the indirect clue. In this chapter, he discusses various historical figures such as Tsanga Gyare Yeshe Dorje (born 1161) and numerous other gurus of the Drukpa lineage. He goes back further into history and mentions the great Kashmiri-born Buddhist scholar Naropa. He writes: “You might wonder why the name of Naropa and Tsanga Gyare are especially mentioned. This is because I have been recognized as the reincarnation and the lineage I follow originated from them (98).” The date of his biological birth is relatively unimportant because this birth is one in a long line of other births. It is the particular births and lives of Naropa and Tsanga Gyare which are important for his true identity. 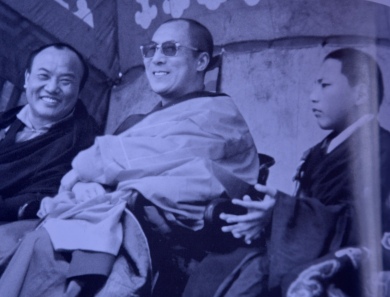 Paralleling this sense that the date of his biological birth is relatively unimportant,  I quickly realize that he isn’t particularly interested in the larger context of his birth or life. There certainly is much that he could have included. What was it like being a Tibetan Buddhist born in India? Or other topics would have been fascinating: the elders’ stories of Tibet prior to the Chinese take-over, the pain of that Chinese conquest, the Chinese destruction of Tibetan monastic life in the name of “class struggle,” his relationships with other Tibetan leaders such as the Dalai Lama. While he mentions in five or six places the Chinese occupation of Tibet and his relationship with the Dalai Lama, these comments are cursory. His concern in this book is not to write about these contextual topics.

Having adjusted to his writing style and the purpose of this work, I find it a pleasant read. I appreciate his apparently sincere humility.  He is quick to point out his own faults. “My horoscope states that I am a son from the realm of the gods. I don’t know what this means exactly, but I certainly seem to have tendencies of the distractions of a lustful god (52).”  I sense that he is a man who has tried to understand the obstacles to being a good person, a good leader of the Drukpa branch. Like Augustine in his Confessions, Gyalwang Drkpa noticed the smallest things that carried larger import. He is honest enough to admit that he noticed girls and young women. “Watching the young couples walk around made me envy them and I used to think it would be a pleasure to go around with a young girl (140-141).” He describes his own faults as a young student. “For many years I did not realize that others’ faults were a reflection of my own faults. Seeing others’ faults made me unhappy, and although I don’t remember saying any harsh or hurtful words directly, I remember criticizing them behind their back and accumulating negative karma by speech (276).” Speaking from his own experience as the leader of the Drukpa branch of Tibetan Buddhism, he writes: “It is clear that if one has desire for fame and praise they drag you down and give you no happiness in the present, the intermediate state or the next life (245).” I like his insight and honesty.

Even more, I like how he included basic comments about fostering compassion. He learned graciousness by seeing that kindness in his guru and in others. “He (Ontrul) was kind to everyone, not just me. He would take out money hidden under his mattress and give whatever came in his hand and say ‘Take this and go Don’t show it to anyone (205).’ ” He recognizes that the opportunity for generosity comes everyday. “Practicing generosity, giving up the smallest act of selfishness for the well-being of others, abstaining from non-virtuous deeds and upholding ethics is like building a dike before the flood (115).”

Back to the photographs. When I finish reading and thinking about the book, I realize that I am still curious about Gyalwang Drukpa’s life. From my perspective, there is a disconnect in the book’s text and the photographs. The photographs initially caught my attention and motivated me to read his book. The black-and-white photographs have that aged look: here he is as a four year old during his enthronement; here he is meeting the Dalai Lama; here he is with other Tibetan rinpoches. It is the other photographs though which catch my attention. I particularly find striking the photographs which show him reaching out to several blind individuals as well as one which shows his riding 2500 kilometers from Kathmandu to Ladakh in support of environment concerns. I do not find in the text a single reference to any of his activities related to those photographs! 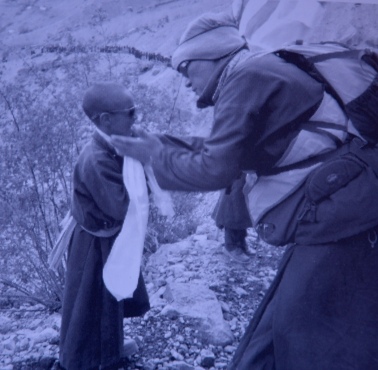 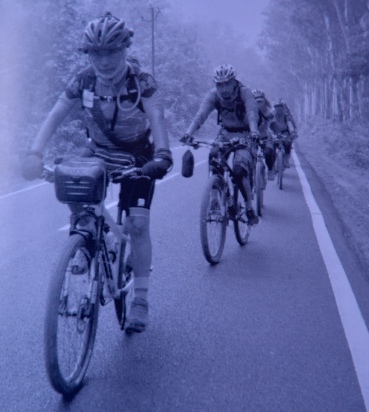 The photographs make me want to know more though. When I googled his name and read the Wikipedia entry, I smile. In 2007, he created the Live to Love NGO. It has five aims: Education, Environmental Protection, Medical Services, Relief Aid, and Historic Preservation. Others have honored him in numerous ways. Two examples are in 2010, he was honored with the United Nations Millennium Development Award and in the same year he was honored as the recipient of the Green Hero Award by the President of India. While the book illustrates a man deeply concerned about training young monastics, Gyalwang Drukpa has many other passionate concerns.

My Crazy Tales may have omitted features of his life that particularly interest me; but his life, like the English woman Cicely Saunders who started the hospice movement and the Canadian Jean Vanier who started L’Arche, shows the power of one individual’s life making the world better in many, many ways.