Over thirty years ago, I rode a Honda motorcycle. While I had no cross-country adventures, I frequently made roundtrips of 200 mile. Since I didn’t have much money, I found the bike cheap and fun, especially in the autumns and springs. Slightly behind or contemporaneous with James Dean, Peter Fonda, and Dennis Hopper, I probably had an unconscious bit of rebel, adventure loving spirit.

Motorcycles and scooters abound in Ladakh. I see older men on scooters used as trucks as they cautiously roll down the street carrying large and small items. I see a mother and a child slowly putting along on the edge of the road. I see middle age men briskly steering cycles as if they were in their twenties again. 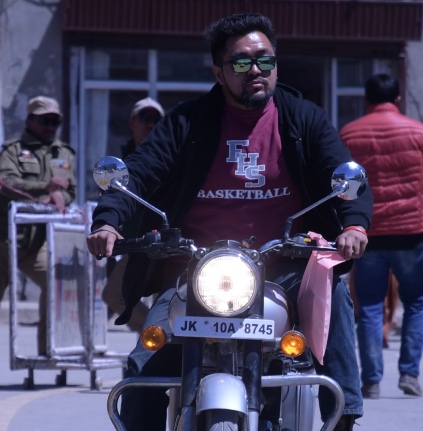 I see those younger men roaring at full throttle down the highway  weaving in and out of traffic. I see young women getting to their destination by scooter, never by a motorcycle.  I don’t see a single middle age women using a scooter; I don’t see the elderly navigating a motorcycle. No surprises there. Despite a few exceptions, almost all ages use the motorcycles and scooters. One surprising feature, very few wear helmets! Maybe Ladakh does not have here a helmet law; or, maybe Ladakh has a law, but bikers know that the law is not enforced. 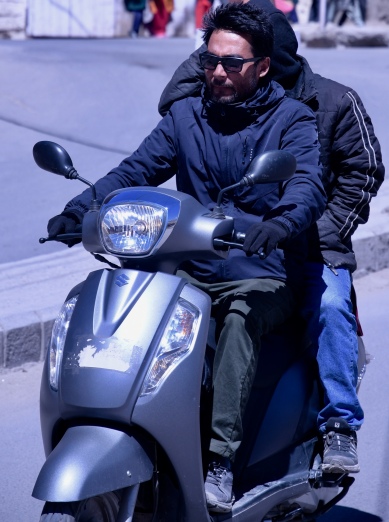 I’ve seen two mishaps and a serious accident while in Ladakh. All three involved motorcycles. The two mishaps involved teen-age bikers. One mishap occurred outside Santi Stupa because the driver lost control as the pavement turned into a rough dirt and rocky road. He and his companion were not hurt, just dusted a bit. The other mishap occurred when a young fellow accelerated too quickly on very fine dirt as he tried to enter a highway. After laying the bike down, he quickly got it upright and roared off. The serious accident occurred on that highway. Bikes never win in a disagreement with cars, trucks, or buses. On the major highway going east of Leh, we saw a bike with one wheel on the ground and the other wheel leaning against a concrete road guard. Next to the bike, a car lay on its side. Although an ambulance (I assume there are some in Leh) had not arrived, a military policeman directed traffic around the accident and the crowd that had gathered. Because we could not see through the crowd, we do not know the condition of the participants nor the cause of the accident. However, we could assume the worst. Somebody had been killed. Two mishaps were trivial; the accident was probably tragic.

The first biker and his companion had just been to the Santi Stupa. Not only had I seen them taking the obligatory selfies, but I saw them spinning the prayer wheels, pausing with heads bowed as they faced the Buddha, and entering the small temple dedicated by His Holiness the Dalai Lama in the 1990’s. Rightly or wrongly, I inferred from all these actions that they were devout young Tibetan Buddhists.

I can imagine all sorts of things going through their minds. Some thoughts might involve “explanations” for the mishap. “Dang it, I and my friend desired to have a good day. We started it off saying prayers at the Santi Stupa. Now this. I tried to be careful. I simply didn’t anticipate the pavement ending.” Some thoughts might have involved gratitude. “Boy, I’m glad that we asked for the Buddha’s and the Protector Deities’ blessing. We could have broken an arm, crushed a leg, or suffered a concussion when we took a spill.”

Although the two men seemed to be performing natural Tibetan Buddhist activities such as turning the prayer wheels, pausing in front of the Buddha, and probably praying, maybe even prostrating in the temple, those activities did not guarantee safety. Those activities were followed by actions where the biker, because of ignorance or inattention, did not navigate the new situation of the pavement ending. Even the best intentioned actions, followed by actions of ignorance or inattention, can lead to danger.

Of course, these two young Tibetan Buddhists could have other thoughts. To take one example, rather than acknowledging the Buddha and the Protector Deities as beings of compassion, the men could have said to each other. “Well, so much for their help in this situation! I guess that they had more important things to do.” Yet, if the two young men were devout Tibetan Buddhists, I suspect that such an attitude would be a “misfiring” of the language. Faithful Tibetan Buddhists would not entertain or speak such a statement seriously. Because so much of Tibetan Buddhism centers around the nature and the role of the Buddha, these young men would find another explanation for the lack of immediate protection.

As I mentioned above, the second biker was exiting a dirt path onto a major highway. Since it was late in the afternoon and he was the only rider on the bike, he might have been leaving a job, eager to join his friends for a bit of post-work fun. Assuming that he also was a good Tibetan Buddhist, I can speculate that he might have a variety of thoughts about the spill.

He might have all sorts of “explanations” for the spill. “I almost made it onto the highway. Maybe I pushed the bike too much to get that thrill of acceleration.” Or, “Darn it, I sure wanted to see my friends. Maybe I better slow down to make sure that I actually get to see them!”  Some thoughts might have expressed guilt leading to a vow to be more careful next time. “Boy, I dodged a bullet this time, I’ll be more careful tomorrow when I get off work.” Some thoughts might have revealed anger directed toward others on the highway. “Why should there be so much bunched-up traffic on the highway. You’d think that they would slow down to let others get onto the road.”

Just as in the prior mishap with the two men, this mishap plays into some basic features of Tibetan Buddhism. The young man’s actions can be linked with basic terms such as desire, dharma, and karma. Intrinsic to all forms of Buddhism is the notion that our desires are a key element of each and every action. Those desires connect our action to the more abiding rules of dharma. In dharma, for example, self-serving actions are disparaged and rash actions are reprimanded. Regardless of the action, all of our actions result in consequences, negative or positive, immediate or long-term. The bedrock principle of karma applies to everyone, at all times. Even if the young man had no thoughts of the Buddha in this situation, he could still be a good Tibetan Buddhist in the way that he saw the linkage between his own actions, the dharma, and the principle of karma.

Like the previous situation, I can imagine that the young man might have used Buddhist language in such a way that it “backfired.” He might have thought “Dang it, others get away with speeding onto the road, why couldn’t I?” Or, ”Shoot, this crazy bike can’t handle a bit of loose dirt!” In these two responses, I suspect that other Tibetan Buddhists would say the young man is not recognizing his own desires and is avoiding his own responsibility for the situation. Instead, he is seeking an exception to the principle of karma or attaching responsibility for his mishap to something else, namely the bike.

The third tragic situation might have involved a fatality. In this case, I wonder how the crowd of Tibetan Buddhists might be responding to this accident. Members of the crowd might be thinking: “I’m sure that the biker had family and friends. I am sad for him, and for all those who cares for him.”  Members of the crowd might also say to one another: “The biker may or may not have deserved this. Who knows. I know that we all suffer in some fashion, in some way. Such is life. I hope that he fares better in his next life.”

Similar to the two previous mishaps, this accident could bring forth a variety of Tibetan Buddhist responses. On the one hand, Buddhists could affirm the interconnections of this world. Since our actions take place in a shared world, with all sorts of dependencies, we must always be aware of the consequences of such a shared world. Our actions and other’s actions may collide. Neither of us may intend a collision; neither of us may desire to hurt or be hurt. However, since the world is interconnected, we are deeply and inescapably vulnerable creatures. On the other hand, Buddhists could respond to the situation which thoughts about reincarnation. In a sober sort of way, the crowd members could place this death within the larger context of each person’s other future lives. It could appear callous and cold; however, to a Tibetan Buddhist, I imagine such acknowledgments will arise, whether right then as a member of the crowd or later at home as they tell others about what they saw. 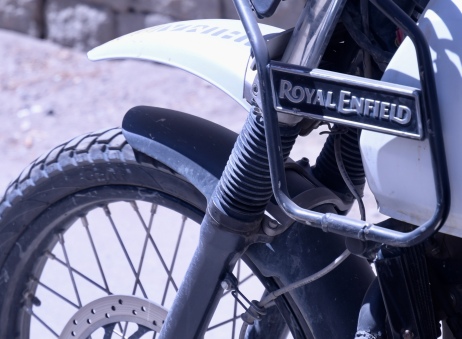 So, while in Ladakh I saw two motorcycle incidents and one bad accident. There is one rule that I learned when I had a bike: although bikes are almost indestructible, the biker certainly isn’t. As I think about these situations, I offered some purely hypothetical responses by Tibetan Buddhists. While my thoughts are speculative, my recognition that individuals can use religious language in all sorts of ways is not. Religious communities have members who become fluent in their communities language. Yet, that doesn’t mean that the use of that language is fixed. Maybe part of being a fluent speaker of a religious communities language is the ability to speak in a variety of situations and knowing that a variety of ways of speaking in those situations may be authentic. 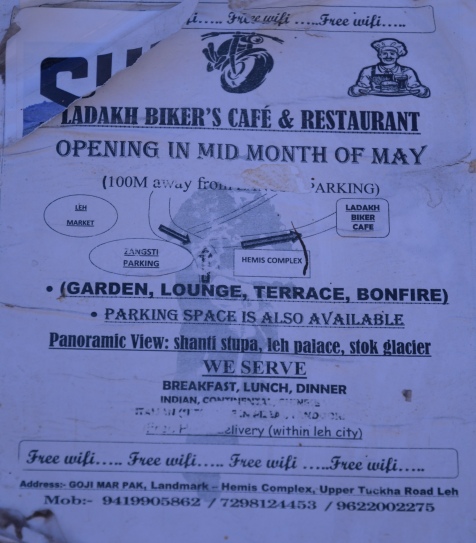