Francis is more than simply a Jerusalem street name. The Franciscans with their brown robes blend into the white, yellow, or tawny colored Jerusalem stone. As the Franciscans of the Holy Land come from 45 different nations, they themselves exhibit the varied skin color of places all around the globe. The Franciscans are markers of Jerusalem’s Christian “sacred geography.” While there is more to Christian Jerusalem than the Franciscans, they certainly help shape any traveler’s present day experience. In so doing, they provide memories of one past with certain and project future hopes for both pilgrims and residents. 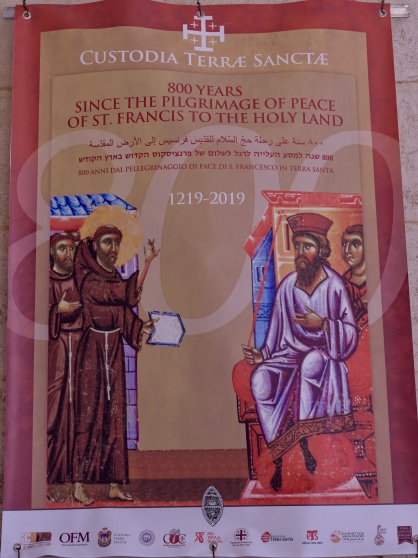 Historically, they have been the “Custodians of the Holy Land.” Today, I see the posters and banners: “Eight Hundred Years Since the Pilgrimage of Peace of St. Francis to the Holy Land.” From 1219-2019,  the Franciscans’ mission has included responsibility for numerous Holy Land sites, sacrifices in working for pilgrims and residents of the Holy Land, and doing all, in their words, for the purpose of “witnessing to the gospel.”

While those in Jerusalem don’t dwell upon the historical figure of St. Francis, they make clear their debt to him. Francis of Assisi formed the first General Chapter of the Friar’s Minor in Assisi in 1217. As a traveling order, the Franciscans divided the world into eleven provinces.  Brother Elias was given responsibility for the vast area considered to be the “Holy Land.” Probably in 1219-1220, Saint Francis traveled to Palestine where Crusader documents speak of a “Poor Man of Assisi” and to Egypt where he met Malik al-Kamel, the Sultan of Egypt and the nephew of Saladin the Great. During the next several decades, the Franciscans served to guard the religious sites and to welcome pilgrims to the Holy Land.

Since religious behavior never occurs in a vacuum, when the Ottomans conquered the region in 1517, the Franciscans found themselves again eventually expelled. With the assistance of the kings of France and Spain and the Doge of the Venetian Republic, the Franciscans reestablished in 1560 a presence at the St. Savior’s Monastery in the northwest corner of Jerusalem’s Old City.  Consequently, they also were given responsibility for other sites such as the Nazareth site of the Annunciation and Mount Olive’s Gethsemane. Today, almost one hundred Franciscans live at this monastery as they perform their duties around Jerusalem.

A visitor sees the effects of this Status Quo at the Church of the Holy Sepulchre. From the courtyard, tour guides love to point to an exterior ladder which has existed (or various replacements) since the Status Quo agreement. The ladder can not be removed as such removal would violate the agreement.

More seriously, as I visit the Church of the Holy Sepulchre, I see the juggling act which the Status Quo agreement created. Since the Edicule, the empty tomb, is the center of liturgical celebrations, the Roman Catholics, the Greek Orthodox, the Armenians, and the Coptics each have services and processions around this small structure. While awkward, the different Christian communities manage the timing of these processions. Without this agreement, there would be complete chaos. This past week, I watched as a “soccer-type” Orthodox crowd pressed forward to enter the Edicule. While only numbering two or three hundred, the surging crowd kept pushing and pushing. Several older people almost fell to the ground. I could only imagine if in addition to the Orthodox, the Roman Catholic pilgrims had lined up and were pushing to get into the tomb.

Another major issue centers around the various churches maintaining a 12th century church structure. When I visited the Church of Holy Sepulchre in 1971, I barely saw the Edicule. To prevent it from collapsing, an iron cage surrounded it. In addition, since the  stone was blackened with the soot of millions of candles over the centuries, I couldn’t see the marble and limestone. When the Israeli Antiquity Authority briefly closed the church in 2015 because of safety concerns, the various churches faced an ultimatum. Fortunately, they agreed upon repairs. Right before my 2017 March and April stay in Jerusalem, the restored Edicule was reopened. I barely recognized it!

In reporting the meticulous restoration of the Edicule, the Times of Israel described the archaeological findings.

“Below the outer marble layer was a white rose marble slab engraved with a cross, which the team dated to the late Crusader period of the 14th century. Beneath that marble slab was an even older, grey marble slab protecting the bedrock, and mortar on the slab dates to the 4th century, when Roman Emperor Constantine ordered the Church of the Holy Sepulchre built.”

Whatever else may have occurred between the first century and the fourth century, the restoration did demonstrate Christians’ long tradition of locating Jesus’ burial at this site.

Of course, besides staffing the Church of the Holy Sepulchre and other holy sites, the Franciscans can be seen during one of the many processionals.  As I and others take their  photos, sometimes sticking a camera within feet of their faces, I am amazed at their patience and good-natured attitude.

As a Christian order, the Franciscans follow Jesus who they believe is the Incarnation of God. Their website asserts the commonsensical claim: “For there is no Incarnation without a place. For us, loving this land means to love Jesus. And we cannot think of Jesus without loving His land.”

The Franciscans do love the land. They care for 74 sites and sanctuaries in Israel, Syria, and Jordan,15 parishes in Jerusalem, and numerous monasteries and convents, schools and social services throughout the broader region.

In addition, the Franciscans also aid the numerous Christians who travel to the Holy Land. They offer numerous services. In their Casa Novas, their pilgrim guesthouses, they provide accommodations. I’ve seen them serving as guides for numerous pilgrim groups. And, like Father/ Friar Andy at Bethlehem’s Shepherd’s Field in 2017, they offer Mass at various sites that they oversee. They certainly continue their mission to care for the Holy Land and visitors to this land.

While the Franciscans provide memories of an eight-hundred year past, they also create hopes for both pilgrims and residents. For those pilgrims hoping to find a renewal of their Christian faith, the Franciscans provide one powerful set of sites and explanations which offer a means of realizing those hopes. For the residents of Israel and Palestine, they also provide hope for dealing with the difficulties of living here.

Although others use the reference to Francis or to Pope Francis for business purposes, most references to Francis lead one to the Franciscans. I, like others, see Franciscans everyday. I may be walking the streets of the Old City; I may be visiting the Church of the Holy Sepulchre. I simply can’t imagine a day without seeing these familiar, brown-clad men. For eight-hundred years, others have had the same experience!