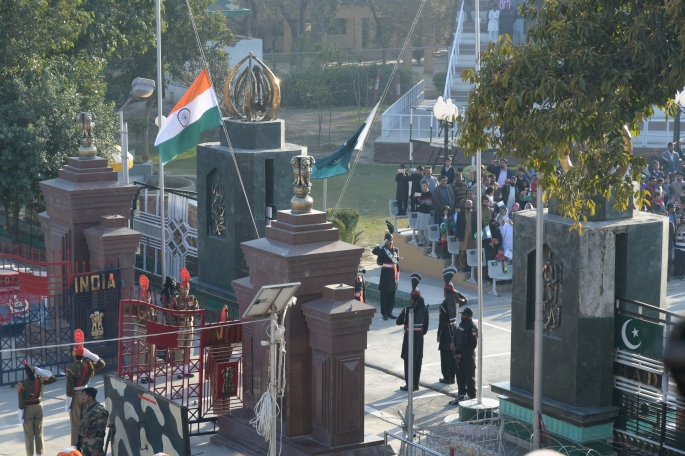 I watch the lowering of the Indian flag at the Wagah Border crossing which is only 12 kilometers from Amritsar. The tourist brochure likens it to the changing of the Guard at Buckingham Palace. Even before attending the event, I have my doubts!

To put this in context, India and Pakistan have always been at odds. On August 15, 1947, India declared its independence from Great Britain. During the following partition of India and Pakistan, scholars estimate that 1 million people were killed. Because of tense relations, there have been three wars, in 1947-48, in 1965 which initially started in Kashmir and spread to other areas along the border, and in 1971 when East Pakistan became Bangladesh as it separated from West Pakistan. While not developing into actual war, Indians and Pakistanis have continually skirmished over Jammu and Kashmir. On November 28, 2008, terrorists based in Pakistan attacked sites in Mumbai killing 173 people during the three-day terror. As I write this blog, the India border is on “High Alert.” When two soldiers were killed recently by terrorists, Prime Minister Modi flew to the site to express sadness yet gratitude for the Indian military. Indians and Pakistani have a history of “Calling out the troops.”

To watch the ceremony, I leave the Golden Hotel at 2:45 PM. We pass an Army base with two tanks at the entrance. Apparently, the 1965 India-Pakistan War had the largest tank battles since World War II.   We also pass an Air Force base: “Look Sharp; Be Smart: Join the Air Force” and eventually a Border Security Base. We also pass three trucks with mounted machine guns. I ask myself though: “Why are the trucks and the machine guns pointed toward India?”

As the driver parks, he reminds me again. “Take only your passport and camera. No bag. “Since the border is approximately 1 kilometer up the road, I join the procession walking toward the border. We all pass through several military checkpoints. At the first security checkpoint, everybody is serious. The guards don’t smile; the foreigners and Indians are quiet as we allow ourselves to be frisked. By the last checkpoint, both foreigners and Indians are asking the guards if they can have a photo. Soldiers smile; children hold the soldiers’ hands (while the other hand sometimes holds onto a machine gun).  This is my first clue that this event is going to be a bit different than my expectations.

We arrive at the seating area for the lowering of the flag ceremony. I and other foreigners and Indian V.I.P.’s are separated from other Indians. Once again, we get special treatment. There are hundreds if not thousands on the Indian side. Although I had assumed that there would be wood bleachers, I am surprised to see large concrete structures. Towering behind the current seating area is an unfinished structure which rises probably 75 feet. I think to myself: “Somebody has not only planned, but also put a lot of money into this show!”

From my seat, I look toward the border. It isn’t like Korea’s DMZ. There is no barbwire, no minefield, no pillboxes with guns. Instead, there are two metal fences eight feet tall approximately ten feet from the border. Each slide has a gate which can be opened and closed. Each country’s flag is between that fence and the actual border.

The Indian crowd grows. Rather than feeling nervous and tense, the Indians are acting as though they are attending the weekend cricket match. Vendors walk around selling water, ice cream, and Indian flags. We watch soldiers, border security police, and the three special soldiers with the red-plumed hats. Every now and then, an Indian V.I.P. and his family proceed to the border fence. There, a red-plumed soldier smartly joins them for a photo opp. Interestingly, a green blazered Pakistani team of some sort walks to the border pulling their luggage. Although I’m sure there have been security checks over-and-over again, there is one long, last security check before these young men cross over the border to Pakistan. They proudly hold some sort of trophy!

I glance every now and then to the Pakistani side. At first, all I see is a family of five and several hundred empty plastic chairs. Slowly those plastic chairs begin to be occupied.

A young Indian man dressed in white carrying four or five Indian flags runs into the entrance way to the border. He has the energy of a college mascot cheerleader.  He stops at an already formed line to distribute the flags. Children and women proceed to run 25 yards toward the border waving the flag. With the cheerleader encouraging the crowd to shout their support, the crowd yells as if this is a pre-Olympic torch relay and every single runner proudly carries the torch, or, in this setting, the equivalent Indian flag. This cheerleading and proud shouting is another clue that this event is going to be a bit different.

The crowd can’t be stopped. Once more encouraged by the cheerleader, more women and children, no men, join the others on the entranceway to the border. It is dance time. At times, the music is very martial with trumpets and drums playing.  At other times, the music must be from a popular Bollywood movie. As if the dancing isn’t enough, the cheerleader gets the Indian equivalent of a stadium wave going. The people in the stands are excited.

The Pakistanis finally reach critical mass and get their side involved. I now hear music blasting from their speakers. It is an equivalent to a “battle of the bands.”  Pakistanis cheer. I don’t see Bollywood dancing but then, that side is Pakistan. (Days earlier on Feb 9th, the Islamabad High Court ruled that nobody in Pakistan could celebrate Valentine’s Day since it was non-Islamic. I’m not joking).

The Indian crowd goes wild when two commandos dressed in full-commando gear race to the border. They face off two Pakistani commandoes who look like they could have come straight from an outlawed Jamaat e-Islami Pakistani terrorist camp. Then, as the speed picks up, about a dozen red-plumed soldiers strut into the entrance area 50 yards from the gate. Two women goosestep their way toward the border. With one very explicit insulting showing of the soles of their boots to the Pakistanis (who are doing the same thing on their side), the big show starts.

Small groups of the red-plumed soldiers race toward the border. Like Monty Python, the soldiers appear to be hurling verbal insults at the other sides. As the Frenchman, high on the castle wall says to King Arthur. “I fart in your general direction. Your Mother was a Hamster, and your Father smelt of Elderberries!”

The insults continue. Indian soldiers jerk their arms upward in fists. I’m not sure if there is an India-Pakistani version of the single finger salute, but if there is, I’m sure that they were giving it to each other. Of course, there is the slow righting of the hat.  I’m wondering if the soldiers are thinking: “I’m not going to be indecent before you even though you deserve my being officially dressed.”

There is a race to see who can get the flag down and folded the fastest. The Indian crowd cheers even though I can’t tell who folded the flag the fastest. Finally, both gates slam shut. All but a few of the soldiers disappear. Hundreds of the crowd though fight to get close to the gates to have one last photo.

It is silly. Monty Python couldn’t have scripted the flag lowering ceremony at the Wagah border crossing any better. However, when Indians and Pakistanis have so often taken to firing bullets which bring blood and death, this “firing” of words and exaggerated gestures is a welcome relief. This humorous parody of a more serious “lowering of the flag” brings laughter not tears.

One thought on “16. Monty Python at the Wagah Border”