“Lions, Tigers, Bears, Oh My” exclaims Dorothy in the Wizard of Oz. If I change the list of animals, I exclaim the same thing in India.

My brother and I have a very recessive “animal attraction” gene. I do not love animals. My brother and I never had a pet; I don’t think either of us ever wanted a pet. As fathers, both of us gave into our kids request for pets. We got goldfish. The recessive Jones side of our gene pool was different. My cousins did receive a dominant “animal attraction” gene. In an email exchange with my cousins I was reminded that the great-uncle I was named for had sheep on his farm. Next to my grandmother’s house was both a pasture for horses as well as a pig farm down the road.

When seeing India, I constantly see animals. Just as tasting India includes chai, chicken masala, tandoori chicken, and dosas, I see India with animals always in the picture. Although it isn’t natural for me to write about animals, I find some of the following information about animals in India rather interesting.

Unsurprising, India has the most cattle, estimated at 215 million, in the world. Many of the domesticated animals do quite well. They produce over 150 million tons of milk each year.  However, not all the “holy cows” are well-off. If a cow is too old to produce milk or if one is an older bull, then those cows and bulls must fend for themselves. New research though is questioning the benefit of so many cattle in India. These cattle produce 15% of “greenhouse gas” from the world’s livestock. Cows’ special status in India led to the creation of gau raksha samitis, in case your Hindi is bad that phrase means Cow Protection Groups. Of course, even if one is Hindi, one has a sense of humor about the older cattle.  Indians sometimes name local old bulls after senile senior state officials and politicians.

Researchers estimate that there are more dogs in India than any other country, possibly as many as 30 million dogs. This number includes the approximately 4 million pet dogs. The rest are either stray dogs, confined to cities, and feral dogs which have never been domesticated. The stray and feral dogs spread rabies which result in over 20,000 deaths a year. Because of a plentiful supply of garbage, many of these dogs scavenge quite successfully. Also, because there is very limited governmental animal control agencies or NGO’s such as Humane Society or PETA, there is no coordinated effort to control the dog population. Although there are governmental actions every few years, a 2001 law made it illegal to kill stray dogs.

I have seen rhesus monkeys from Darjeeling to Kerala. In New Delhi alone, researchers estimate that there are 30,000 monkeys. Sometimes I will see a single monkey; sometimes I will see a gang of monkeys. Since a friend of mine had his camera literally stolen from his neck by a monkey in 1990, I am not fond of monkeys. Besides this “monkey terrorism,” I’ve heard additional stories of them biting and punching. Even more dangerous is that 90% of them carry tuberculosis. 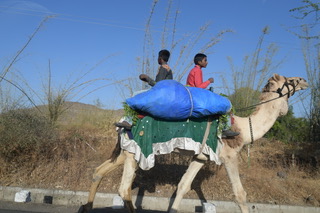 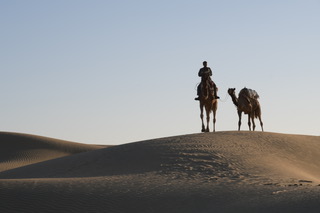 My Jaisalmer driver considered camels a useful animal. In the winter, camels can go a week without water. They can travel 100 kilometers a day while carrying 500 kilograms. They may live almost 25 years. The Indian Army deploys camels in the Thar Desert to patrol the India-Pakistan border because the area is too treacherous for vehicles.

The Indian elephant is smaller than the African elephant. The 30,000 Indian elephants are primarily in the northeast, the northwest, the eastern coast, and tourist sites in Rajasthan. In Jodhpur, the government has restricted elephants from carrying tourists to only four hours a day because of elephant abuse.

I am surprised by the number of peacocks that I have seen. If I had known that the peacock is the National Bird of India, I may not have been surprised. Some estimate that there are over 100,000 peacocks.

Bengali Tigers, panthers, bears, pigs, cobras, vultures also all exist in India. Yet, most of the other animals I’ve only seen in the Darjeeling Himalaya Zoo. This zoo has small roaming spaces for these big cats. These spaces are only slightly more humane than the 20’ by 40’ St. Louis zoo cages of the early 1960’s.

So what? Seeing the animals of India reminds me that we share this world. Our surroundings are not simply other people, the buildings people built, or even the physical surroundings. Instead, we are part of a world filled with all sorts of living creatures.

In Atlanta, animal life is controlled. Dogs can’t be outside unless on a leash. A reported wild fox or wild bear usually results in a report the next day that the animal has been captured and “relocated.” Of course, we have our dreaded squirrels who eat all the bird food intended for the birds. To kill those squirrels though is illegal. If reported, the city of Atlanta “relocates” all nuisance animals. The Indian attitude toward the surrounding animal world is very different. Indians find it strange that animals are to be “relocated.” Indians accepts and acknowledges that we must share our world with animals of all sizes and types.

Furthermore, these comments about animals reminds me of a basic claim about human life. While we humans are “more” than animals, we are not “less.” We forget, to our peril, that we also are part of the  “animal” world.