If a person asks an Indian “what do you think about your country?”, then at some point in the conversation the person mentions corruption. In my limited conversations and reading, I’ve heard or read about the following examples of abusing power.

At Khajuraho’s Isabel Palace Hotel, a hotel employee tells me his experience of applying for an entry level police position. “I had a good name (i.e. my caste was acceptable). I did very well on the qualifying exams. However, the hiring official asked me for $4000 US.” Rather than training to be a police officer, he now works at this hotel. 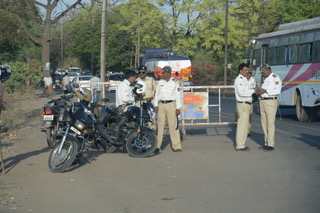 While riding with our driver in Jaipur, as well as other Indian cities, I hear him complain: “If the police pull you over, you better have 500 rps.” I ask: “Why?” He responds: “They fine you for going too fast, for putting on your seat belt only after they notice you, you are driving a motorcycle without a helmet. They’ll find some excuse to fine you. If you don’t pay the 500 rps, then they’ll take your license. It will cost even more and take even more time to get your license back.”

Delhi- Jaipur-Agra is known as India’s “Golden Triangle.” These three cities are  approximately 100 miles apart. Since tourists visit these three cities more than any other Indian area, the area has some of the best hotels as well as a million tourists’ shops. With the money that flows into this region, one would expect that the road system would be among India’s best. No so. While driving from Jaipur to Delhi, I ask our driver: “Why isn’t the road better?” He pauses and then says: “Nine years ago the government awarded a contract to upgrade and construct new super highway. The current government finally told the contractors that the road must be finished this year. If it is not finished, then the contractor must return the money with interest.” Nine years to create a road with very little to show for it! It is as though Atlanta’s I-75 and I-575 roadwork would not be finished until 2025!

Here is one final example from retired economist Dr. Alok Chatterjee who wrote about four villages in West Bengal. Dr. Chatterjee is writing about the village of Agra (not to be confuse with the city of Agra). Its population is 1850; 22% of this population is illiterate; 80% of the population are agricultural workers. Chatterjee writes: “In NREGA (the National Rural Employment Guarantee Act of 2010), digging of pond, construction of roads continued effectively for several years, but all of a sudden all works came to a halt at the beginning of the current year (2014), for reasons best known to the impersonal authorities only, leaving in its wake a stark void. The poor villagers do not know where to seek for help, let alone lodge complaint.” ((Socio-Economic Survey of Four Villages,” 8) Without stating directly that there is corruption, Chatterjee is indirectly implying the cause for the stoppage. Instead of funds going to the village, those funds go to “certain officials.”

I can put these stories in a broader context. In the March 9th edition of The Goan, the editor’s page contains the following article entitled “India’s Bribe Factor.” “We know that corruption is omnipresent. A recent survey places India at the top of the list of corrupt Asia-Pacific countries. In other words, if bribery were a sport we would have won the gold medal. Transparency International states that 41% Indians feel that the rate of corruption has shot up considerably in the year gone by. Seven out of 10 people in India have paid bribes to someone, one way or other.”

Corruption is an abuse of power. Whether the purpose is driven by self or group interest, the action is a form of injustice. I don’t know enough about Indians to know why this has become such an entrenched form of living. Is the explanation: “We’ve always had corruption. I’ll accept it.” Is the explanation: “Paying a bribe is my only way to get out of this helpless situation.” Or is the explanation: “I’ll pay a bribe now. I’ll get people to pay me bribes when I have power.” Regardless of the cause and the discomfort, many Indians seem to accept and complain about the ubiquitous corruption.