There is the past which is no longer present. With the building of Aswan’s High Dam, the Nile downstream no longer has crocodiles. I don’t see hippos either. I don’t see barges floating large blocks of granite to the Pharaonic building sites.

I see much of the present. Since the present pushes the past into new shapes, the most die-hard romantic Orientalist will be severely disappointed. The past continues but in new forms. 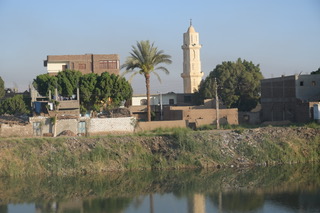 I can still see some parts of the temples and tombs along the Nile. Now those temples appear only in part; now those temples are surrounded by markets and minarets. Rather than hieroglyphics, I see graffiti. I see that irrigation continues, but rather than using channels, the irrigation is now piped inland rather with gas or electric motors. I wave at people traveling along the Nile, but now people travel in other cruise ships, inland by train, or even by hot-air balloon. People still look at the stars, but now people also have satellite dishes which look at the same stars. I see people throwing orange or mango peelings into the Nile, but I also see the dark smoke from factories polluting the air. Those same oranges, mangos and other fruits not only feed the people along the Nile, they are flown to Europe and even the United States. 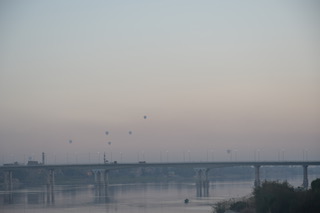 For all the past and for all that present, the Nile has given and continues to give life. It offers water. It pushes the turbines of the High Dam which provides energy and electricity for the 22 million people of Cairo and others along the way. The Nile still waters the fields which extend for 4-6 miles on either side providing food for Egypt’s people. It provides the means of transport from sailboat to a modern cruise ship. The Nile is more than simply a long river; the Nile is the source and giver of life to many past and present Egyptians.