While traveling in Egypt, I see numerous tourist shops selling books of David Roberts’ art. The same tourist shops might even sell single inexpensive works or even a collection of his reproductions. I wanted to know more about David Roberts.

David Roberts, born of a Scottish shoemaker and his wife in 1796, began dabbling in art at an early age. Through a series of fortuitous events, he became a set painter for London’s theaters such as Coventry Gardens. His romantic style captured detail as well as evocative scenery. After traveling to Spain and painting Spanish scenes, he was persuaded by a fellow artist to become a full-time painter. For eleven months in 1838-1839, Roberts traveled to Egypt, Jordan, and Palestine sketching sites as he traveled. After returning to England and publishing his sketchings as lithographs, Roberts became one of the foremost artists in shaping the “imaginative geography” of the Mideast.

What was this imaginative geography?  He portrays a foreign, remote, curious, and exotic world.

The world of Egypt and Palestine was foreign. Roberts became acquainted with the ancient world of Greece and Rome. Only a few years earlier in 1824, Lord Byron died in Missolonghi, north of the Gulf of Corinth, helping the Greeks in their war of independence against the Ottoman Empire. The perceived world of Greece and Rome was one of reason, a source of democracy and republicanism. 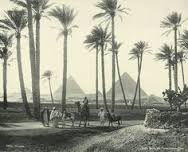 The world of Egypt was foreign. Roberts became fascinated with the architectural remains of ancient Egypt. While not etching close-ups of the ancient pharaohs, the gods, or the hieroglyphics only recently decoded in 1822 by the Frenchman Champollion, Roberts painted the Pyramids and Sphinx. He did let his artistic creativity lead him to misrepresent the Sphinx in one picture. The following scene of an approaching sandstorm showed the setting sun and the Sphinx facing south. In reality, the Sphinx faces east. 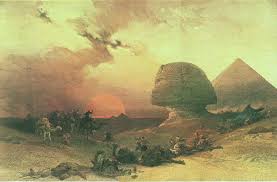 Because he spent several months in Egypt, Roberts painted many of the great Pharaonic sites such as Karnack and Luxor, Edfu, Aboosimble, and numerous other sites. 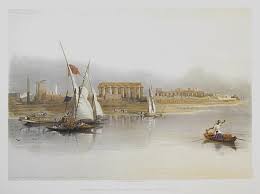 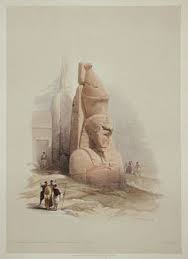 The world of Egypt and Palestine was remote. As a child from Edinburgh and a London dweller, Roberts did not see deserts. He captured the distance from the British Isles to Egypt through the ancient remains that blended into the desert. He painted the obligatory tent and camel. However, the remoteness was not simply geographical; the remoteness was also a remoteness from the contemporary inhabitants. Many of the temple remains were buried in sand. Many of the temples were portrayed as simply providing a place to build a dwelling for the local people. Like Classical Chinese painting with nature overshadowing individuals, Roberts’ etchings had the ancient temples dwarfing individuals. A statue of Ramses II or the 130 columns of the Great Hall of Karnack overwhelmed the individuals standing at the foot of those columns. The world of ancient Egypt, Pharaonic Egypt, was remote from the dwellers Roberts painted. Their world had displaced the Pharaonic world, but the new world certainly didn’t compare in a positive way with that Pharaonic world as a civilization.

The world of Egypt was exotic. Roberts did include Arabic and Nubian individuals in his paintings. These men had a long flowing robe with some sort of headdress. Occasionally Roberts even painted himself into a scene as an artist dressed in a similar robe and turban. When a fellow-artist did a full portrait of Roberts, he painted Roberts in robe and turban as I showed at the beginning of this blog. Concerning his human subjects, Roberts painted Egyptians at the market, individuals haggling over prices, Nubian men with their interesting haircuts, and women as slaves. In spite of the ever-increasing depiction by other artists of Arabic culture, with the alluring nude Arabic women and the men’s paradise of a harem, Roberts generally avoided such exotic themes. 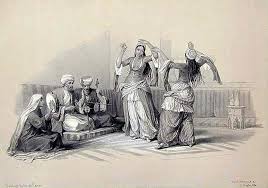 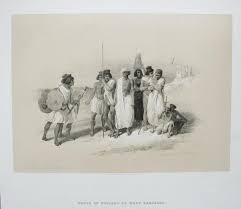 Robert’s effect was profound. He helped shape what Edward Said calls the “imaginative geography” of the Mideast. He reinforced that perception that the Mideast is different. Before the advent of photography and during the beginning of Thomas Cook’s tours from England to this region (at one stage Thomas Cook owned all the tour boats on the Nile), Roberts shaped many people’s “imaginative geography.”

He perpetuated the view that the present Arabic world could be dismissed. Egypt had a past period of greatness, Pharaonic Egypt that lasted from 3000-500 BCE. Egypt, and other parts of the Arabic world, had lost that greatness. A certain greatness returned during parts of the Islamic era, but even that era has passed. Roberts paints the present world he viewed as a world of curiosity, not a world which contributed to civilized life. Contrasted to that noncontributing world, the present world of the British Isles was superior in numerous ways, from culture to political life to military power.

Roberts did not reinforce one stereotype of Arabic world. He did not portray men with daggers, men with swords raised, men with faces contorted in rage and anger. He painted a peaceful world of men, a world which had the beauty and innocence of long-ago.

Roberts left out the daily, ordinary life of the small subjects that he painted There was no farming or fishing along the Nile. There were no women raising children. There were no deeds of kindness in the exchanges between people at a coffee shop.

Roberts’ perceptions continue today. Unfortunately, the imagined Arabic world of Egypt and Palestine has become a world only of anger and violence. For all his innocence, maybe Roberts’ own limited perceptions did less harm than some of our perceptions today. 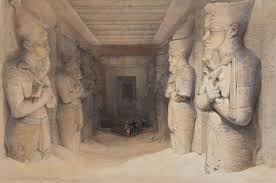