I wish I had the energy to write about the presence of four Egypts: the Pharaonic Egypt, the Greco-Roman Egypt, the Christian Egypt, and the Muslim Egypt. All I can do is submit my photos with a few comments.

Pharaonic Egypt is awe-inspiring. In the past, I sometimes dismissed photos of the Giza Pyramids. I might say to myself “Just another collection of rocks.” I won’t be so cavalier in the future. It is a marvel: the transportation of the stone, the engineering of the pyramids, the collective cultural belief that building a pyramid is “right and good.”

It is no wonder that Egyptians and tourists are attracted to the Great Pyramids. On a free day, I walked 10 kilometers from my Pyramids Hotel to and around the site. On a less awed manner, I sometimes felt like I should offer Kufu or his son Khrafe a cup of coffee since I saw their final resting place every morning and evening from my hotel balcony.

Pharaonic Egypt is everywhere. I did not realize the extent of ruins and artifacts. The day I left Aswan on my Nile Cruise, Egypt’s Director of Antiquities was in Aswan displaying a new statue that was found not far from my hotel. A week before, the same Director of Antiquity was unveiling a new large Pharaoh statute, at first mistakenly believed to be Ramses II, at the Egyptian Museum.

One of the more interesting days of my Egypt stay is traveling to Abu Simbel to see the two Temples saved from Lake Nasser’s waters. In the 1960’s, Egypt supported by UNESCO dismantled the Ramses II Temple and that of his favorite wife and moved them several hundred feet higher. Since my Egypt Air flight was cancelled, I woke one morning at 4:30AM to travel 350 miles’ roundtrip by private car. Since we had to return to Aswan to board the Nile cruise boat at 1PM, I only looked at the speedometer once. We were probably doing 150 kilometers per hour. Because of flying by the tour buses and tour vans, I was the third person at the site. I was amazed at these two temples, and that they had been built twice!

I had forgotten that Egypt was important for the ancient Greeks and was the “breadbasket” of Rome. From the city called Alexandria after Alexander the Great to catacombs which held the remains of a Roman family, a traveler sees the remains of Greeks and Romans.

A highlight of my experiences has been hiking Mt. Sinai to see a sunset as well as spending a day at St. Anthony’s Monastery near the Red Sea. With the help of a friendly camel whose name I forget and my own two feet, I managed to see a beautiful sunset. In addition to five or six friendly vendors along the way, I met an Israeli family of eight who were descending the mountain while I was ascending. I joked with one of the girls who was carrying a five-pound rock. The family laughed as I said: “Taking the mountain back home?” Later, as I was descending, I met a Kenyan ahead of a small group of Kenyans who was hurriedly trying to reach the top before it became pitch black. Even the few lights of St. Catherine’s Monastery in the distance did not hinder seeing thousands of stars.

I also will remember the hike to the cliffs above St. Anthony’s Monastery to see the purported cave of St. Anthony. Afterwards my guide and I ate rice and lentils together in the “canteen” before seeing the monastery. I was led around the grounds by Father Ruwais Anthony who I had to support because of his recently broken leg. When he asked where I was journeying next and I responded “Jerusalem,” he proudly rolled up his robe sleeve and showed me a tattoo he got in Jerusalem last year. I was rather surprised that a 70ish year old monk was proud of a tattoo. 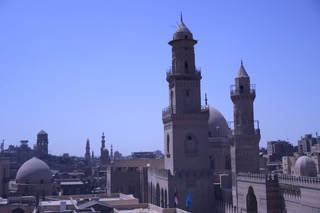 I’ll also remember wandering around old Islamic Cairo, the “city of a thousand minarets.” We think that churches are like kudzu in the south; mosques are like kudzu in Cairo. I did feel odd when I was eating kosheri while 2-3,000 were participating in Friday noonday prayers only 50 feet away!

There is more than one Egypt. As a collection of different periods and people, Egypt is fascinating.