Although life in Israel is not always easy, Israelis address aspects of daily life as best they can. In Jerusalem, everybody is affected by a different weekly schedule. When I realized one Friday morning that I needed to buy two more ink pens, I knew that I had to rush to get to a store outside the old city before it closed. When I arrived, the store was already closed. The workers were already respecting the sabbath. I had a flashback to growing up in Illinois when most stores, from gas stations to grocery stores, were closed on Sunday. Here are some observations and conversations I had about three Israeli groups and their relationship to work: the ultra-orthodox Jews, the young Israeli Defense Force (IDF) soldiers, and the “Aliyah” Jews.

I learned first about the ultra-orthodox. The ultra-orthodox are heavily concentrated in Jerusalem. Apparently, Jerusalem has among the lowest individual gross income in Israel among Israelis. The cause is that a large percentage of the ultra-orthodox men do not work. The highest ideal for them is to study Torah. Interestingly, while in the past, ultra-orthodox women were prohibited from working, currently more ultra-orthodox women work in some sort of acceptable work to support the family. Those families are large! While I was on a bus with a Tantur-sponsored tour, we would laughingly shout to each other “Two baby carriages and three more kids.” Or “A twin baby-carriage and six other kids.” How parents of ultra-orthodox families with so many children could find time to work Is something that I don’t understand. 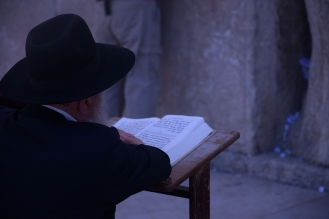 An Economist June 2015 article “Eat, Pray, Don’t Work,” describes the genesis and the possible future consequences of ultra-orthodox men not working. “Praying and Studying Torah” is interpreted as one fulfillment of the Biblical statement that “the land will be filled with the knowledge of the Lord.” Because of the destruction of Eastern European yeshivas during the Holocaust, the Israeli government decided to financially support 400 yeshiva students in 1948. Because of the need to build political coalitions, this number was expanded to include all Haredi (as many ultra-orthodox are identified) in 1977. However, as Israel looks at the future, the statistics paint a grim economic picture. By the 2050s, the Haredi will be 27% of Israel’s population. At that time, Israel’s public debt will balloon to 170% of GDP. It can’t continue to pay for such a large sector of Israel’s population not to work.

My second lesson is about the thousands of young people who serve in the Israeli Defense Force is considerable. While ultra-orthodox and Israeli Arabs are exempt from service, all other Israelis—men and women—serve for either one or two years at the age of 18. According to Wikipedia, approximately 24% of young Israelis have some exemption or another. As I traveled around Israel, I was struck by the number of soldiers waiting at bus stops, hitchhiking, or walking along the streets. Rather than living on a base, many young soldiers live at home and report to their station! I also talked with an American Israeli who counseled these young Israelis after they left the IDF. “These 18-year olds are given a gun. They are making life-and-death decisions. And they are scared to death.” Besides worrying about their actions while soldiers, we both worried about the trauma these young Israelis experienced and how that trauma would scar them for life. I told him of my experience with a young fellow around 1970. This coworker, who was a Vietnam vet, and I went fishing one Saturday. As we were walking through the brush, we heard rustling sound about ten feet away. In an instant, he swiveled his fishing rod into a firing position as though his fishing rod was an M-15 automatic weapon. “Whoa” I said. He replied “Sorry, I’ll never shake my days in ‘Nam when I had to be prepared for anything.” I imagine the young Israelis are like that now.

A third and final group consisted of those who had made “Aliyah” to Israel. Established by the Israeli government in 1950 in the Law of Return, “Aliyah” refers to diaspora Jews and their descendants who can move to Israel and claim Israeli citizenship. I talked with a youngish Russian-born woman and with a mid-50’s New York man. The young woman whose parents had migrated from Russia to Israel loved living and working in Tel Aviv. Although she had escaped a terrorist attack and knew families who had daughters killed in the Dolphinarium nightclub bombing in 2001, she said that she couldn’t imagine living and working anywhere other than Israel. The man in his mid-50’s from New York was in the process of moving permanently to Jerusalem. “Our kids have moved here. We want to see the grandkids more than the 2-3 times a year that we do while visiting.” Since I am familiar with stories of age discrimination in the USA, I was surprised by his stating that he had several job offers from Israeli firms. “If you’ve got a good resume and if you can show solid recommendations, then you can find a job.” He described two consulting positions one with an Israeli high-tech firm the other with a financial firm. He said: “I’ll accept one of the two offers. It is just like being back in New York.” Both of these “newcomers” to Israel love Israel and have had no trouble finding good employment.

Like people elsewhere, most, but not all, Israelis work in some fashion or another. There are those like the ultra-orthodox who do not work and are creating an economic burden for Israeli society. There are those such as the IDF soldiers whose work not only is hazardous but has life-long consequences. Like many other countries who are absorbing refugees, Israel also absorbs approximately thirty-thousand diaspora Jews who want to call Israel home. Absorbing them into the work force is probably not an easy task. Whether one is an ultra-orthodox Jew, an IDF soldier, or a person making “aliyah,” every Israeli lives with clouds of violence hanging overhead. As reflected by the compulsory military service, these clouds of violence affect all spheres of Israeli life, including work.