Raanan works for peace in Jerusalem. Preparing to be a rabbi at Schecter Rabbinical Seminary, Raanan is probably not your stereotypical rabbinical student.

Born in Vancouver and raised in San Diego by secular Jewish parents, Raanan became more intensely aware of his Jewish roots while covering a conference in Cuba as a young college newspaper reporter. Another conference participant in a conversation dismissed a comment by Raanan saying “You are Jewish. What do you know about the poor and oppressed in Central America?” Raanan was surprised. “How did he know I was Jewish? I hadn’t said that I was Jewish.” Raanan said to me: “I finally figured that I needed to know what my Jewishness was!” Subsequently, he moved to Israel, initially lived in a kibbutz, and became an Israeli citizen. 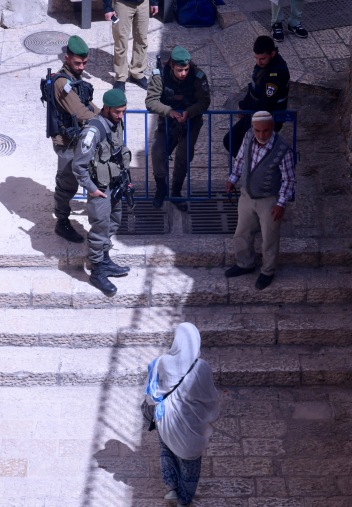 He was not the typical Jew making “aliyah” to Israel. All Israeli citizens, with some exclusions such as ultra-orthodox Jews, are required to serve two years in the Israeli Defense Forces (IDF). During his training, he told an IDF officer “I’ll never use a gun.” Those words were not the right words to say to an IDF officer! After being thrown into the brig and receiving a few well-placed blows, he was released under the condition that he did alternative service. Certainly Raanan was a young man going against the grain.

Like other Israeli citizens, he learned about Israel’s past. He learned about friends and family members’ sacrifices to help create Israel. One uncle had participated in the 1946 Irgun raid on the King David Hotel which killed 92 people, mainly British. A family. member sacrificed his life to help save others Israelis during an attack. Moved by strong passions, Raanan could have become another loyal, uncritical supporter of the state of Israel.

Nevertheless, Raanan knew that it was important to search for peace if only for the common sensical reason that both Israelis and Palestinians live in the same land. Despite living in the same land, many Israelis and Palestinians never meet face-to-face to have important conversations. Raanan wanted such face-to-face conversations. While involved with a multi-faith group of Jews, Christians, and Muslims while on an “Outward Bound Peace-building Palestine-Israel Emerging Leaders” event, he both made deep friendships and also learned to talk with others who had intense anger toward the state of Israel. One participant even mentioned that his grandfather had played a role in starting Hamas, the alternative movement to the PLO expressing the deep desire to end Israeli humiliation of Palestinians. Unlike some who have a desire for peace from simply an ideological perspective, Raanan’s motivation included these intense encounters with others.

Learning from this experience yielded insights for peace-making, Raanan has written: “both sides of the conflict need a safe place to express their animosity so that reframing can occur and the conflict there be reframed in more productive terms.” Using a metaphor from the sound of a guitar, he writes: “When a string is properly tuned, and then struck, the string next to it will vibrate. If each side in a conflict is represented by a string, this becomes a superb metaphor for how a relationship needs to emerge between two sides as to move away from antagonism. Each side needs to be able to hear and resonate with the ‘other.’”

How do you begin working for peace in a land where violence is common, where “the abnormal has become normal?” When an Israeli suggested that he visit Palestinian schools in the West Bank, he visited those schools. Raanan saw posters of suicide bombers adorning the wall. Those pictures were the equivalent of George Washington, Thomas Jefferson, or Abraham Lincoln adorning classroom walls in the United States. Young Palestinians’ role models were suicide bombers. Their moral exemplars were men who killed. Raanan decided that he had to plant alternative seeds of peace in the minds and hearts of young people instead of seeds of hate.

Raanan decided to work for understanding and peace. He knows that it is a long-term and idealistic quest. As such, he is interested in the process of moving toward peace as much as the actual achievement of peace.

Raanan seeks to know others who seek to remove the obstacles to peace. He interviewed and has written about the former Palestinian professor Mohammad Danjani-Daoudi who led a group of Palestinian students (not Jewish students) to Nazi concentration camps at Auschwitz-Birkenau. The professor experienced such intense backlash from other faculty, staff, and students as well as the wider Palestinian public that he was forced to resign his position. 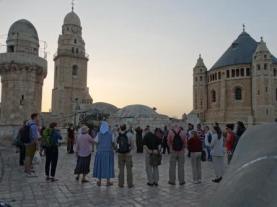 Raanan now works at Tantur Ecumenical Institute creating and supporting interfaith programs. Since practice of prayer is important to the Abrahamic religions, he has participated in the monthly “Interfaith Prayer Services” held in various Jerusalem locations. Since intellectual learning is crucial to these communities, he has organized interfaith “Tuesdays at Tantur.” One Tuesday night, thirty of us listened to Sheik Ghassan Klanasra, a Sufi Iman. On another Tuesday night, a Palestinian Christian and professor at Bethlehem College spoke.

Although his work can be lonely, Raanan is not alone. Groups such as the Abrahamic Reunion, Combatants for Peace, Breaking the Silence, The Parents Circle/ Family Forum, the Tent of Nations and many others also work for peace. However, Raanan realizes that many Israelis oppose such efforts. There have been many smear articles as well as Knesset legislation to hinder these groups. For many Israelis, the enemy is not only the Palestinians, or as I overheard one kibbutz waiter say “those sons of the devil,” but also fellow Israelis. Raanan understands the deeply seated Israeli need for security that drives these actions. For those Israelis, if Israeli fails to preserve its security, then Israel will never have a second chance.

Raanan does not appear to be naive about obstacles to peace. He knows that all Israelis and Palestinians want to live their lives without fear and without violence. He counts others as unlikely friends those Muslims and Christians who want peace. He hopes that someday these Muslims and Christians and others such as fellow Jews and those who are non-religious will bring that desired peace.