Einar was one of my college roommates in 1971. Like many of us whose parents had money, Einar spent months in a study abroad program in Varanasi India and “studied” at Bananas University. When he returned, he wore sandals and a shawl during Indiana winters. He, of course, had a photo of Gandhi and the Bhagavad Gita by his bed. Although I forget if he actually had visited Kathmandu, I would not be surprised that Einar had. It was the Mecca of the late 60s and early 70’s for those of us in our teens and twenties.

Kathmandu has assumed mythic status. In the 1960’s and 1970’s, a young person could pay 89 pounds for a bus ticket from London to Kathmandu. Even Megabus wouldn’t have been able to compete with those prices! Bob Seeger’s 1975 song captured the feelings of those bus travelers:

“I’m tired of looking at the TV news… I’m tired of driving hard and paying dues/ I figure, baby, I’ve got nothing to lose/ I’m tired of being blue/ That’s why I’m going to Kathmandu.”

The Hippy Trail ended in Kathmandu. Since marijuana was grown all over Nepal and many Nepalis smoked it, the government was quite tolerant of all the foreign stoners. As the Nepali government legalized hashish, the government sold it from their own government-run hashish shops. Needless to say, Kathmandu attracted thousands of “freaks.”

While not part of that earlier set of travelers, I wanted to recall some of my experiences from a 1990 trip to Kathmandu. On that trip, I stayed at a hotel a few blocks from Durbar Square.  I’m sad visiting Durbar Square today.  In April 2015, Kathmandu experienced a 7.8 Richter scale earthquake. Approximately 7,000 people died. UNESCO estimates that 60% of the World Heritage Buildings were destroyed or severely damaged, many of them right here in Durbar Square.

I reach the southern end of the square. Exiting the square, I immediately enter “Freak Street.” I can walk it in five minutes if I don’t stop, don’t look at the faded signs, don’t visualize the hippies. But who doesn’t want to stop and look? Here are some of the classic places along the street.

This fading blue door and sign signal the site of the original “Freak Street” bookstore. Here one could find Ginsburg’s Howl and Other Poems,  Kerouac’s Scripture of the Golden Eternity. If one preferred novels and non-fiction, one could find Kesey’s One Flew Over the Cuckoo’s Nest  or Huxley’s The Doors of Perception (the source for the band Door’s name). 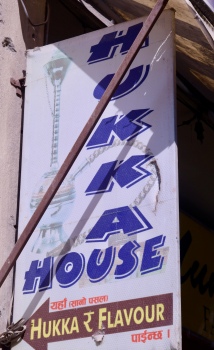 This sign for hookas reminds us of the past. Smoking, swallowing, injecting all became the means to find something. The “Munchies ” sign reminds us that getting high often made one hungry.

The Eden Hotel, originally known as the Eden Hashish Hotel, was the first to make available hash for its guests! Eden Hotel looks much better now since it was renovated in 2017.

I doubt that this shirt shop actually existed then; however, it certainly captures some of the musicians of the era. The psychedelic shirts remind me of Mellow Mushroom’s artwork. 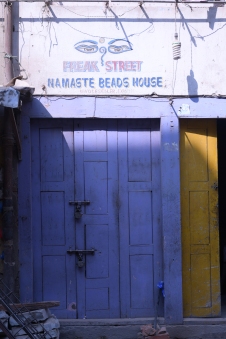 I also am not sure if either this Bead House or this Tibetan mask shop existed back then. Everybody had to have more inviting beads rather than a forbidding heavy door as their doorway! Apparently though, the shop is one of the last shops where wooden masks are both made and sold.

I still see in Kathmandu individuals who want to hold onto that past. While sympathetic to the quest for authenticity which involves cultural criticism, I don’t want to applaud “Freak Street’s” inhabitants way of life. I suspect that many of them found their lives severely damaged. Rather than escaping to a “Freak Street,” I want to live within “ordinary”  life and find there the joys and sadnesses which are part of life.

“Freak Street” is a shadow of its past. I like to imagine that Einar, my roommate from that era, strolled up and down this street as a young college student. I like to imagine what that street must have looked like during those days. I have to work at imagining those days because alongside the “Freak Street” buildings of the past, I find more recent additions overwhelming that past, today’s cafes offering lattes and cappuccinos and travel agencies offering flights over Mt. Everest. As I walk down “Freak Street” nobody whispers to me “Smoke?” “Weed?” The whisperers have moved from Freak Street to streets in the more trendy neighborhood of Thamel. The past lives on, even if it is not the exact same past.