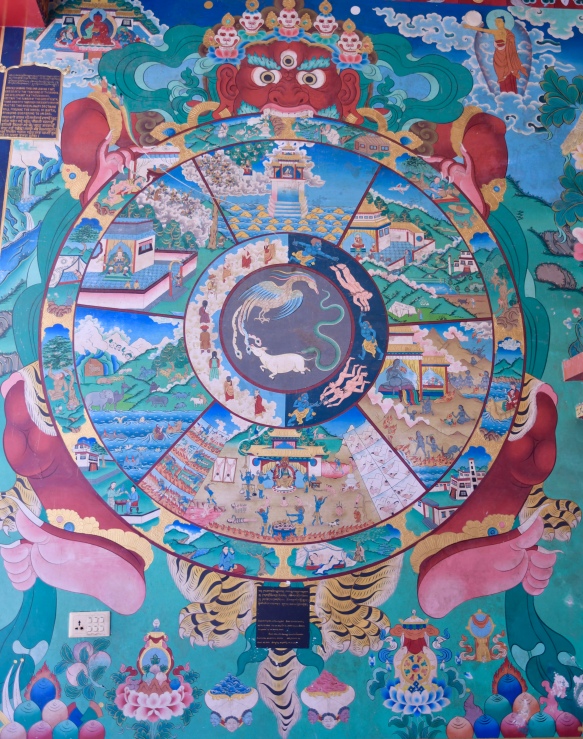 Although the colors vary in intensity and some figures are drawn more clearly than others, the Wheel of Life mandalas have three basic major parts. One part is the large circle crowded with many figures and images in smaller rings and circles. A second part is a terrifying figure holding this larger circle. Without being disrespectful, the figure is like a panda bear lying on its back chomping away on bamboo. The third part is a figure of the Buddha and a few other figures scattered around the edges of the mandala. What is the purpose of the Wheel of Life mandala? From a Tibetan Buddhist perspective, the purpose is to gather and present themes about samsara, the cycles of life and death in one great pictorial narrative. While I can’t describe each of the three parts thoroughly, I can offer some description and interpretation. 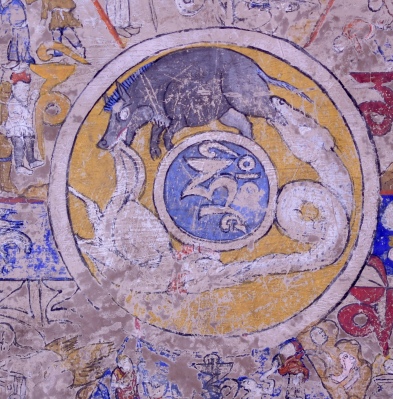 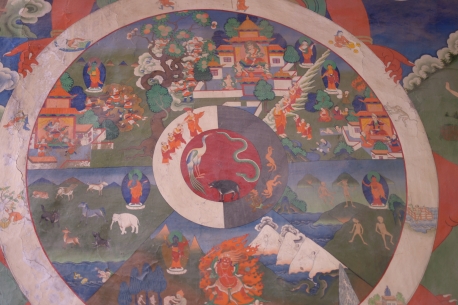 I can stare at the first larger circle for a long time because of the proliferation of figures. This circle consists of several other circles and rings. The innermost circle contains three animals, a snake, a pig, and a rooster. The standard interpretation is that the snake symbolizes desire; the pig symbolizes ignorance; the rooster symbolizes anger. I’m not sure of the origin of these specific symbolisms. I can understand the rooster symbolism since they “angrily” defend their hens from threats; I don’t understand the other two symbolisms. Snakes have been a symbol of “tempting evil” as in the Genesis story or of transformation because of their shedding their skin.  Pigs have symbolized the impure as in the Jewish kosher rules and the Islamic prohibition to avoid pork, possibly because of pigs laying in the mud.  While I can understand the Jewish and Muslim sources for their practices, I have more trouble with this Buddhist symbolism. Having lived in farming communities for five years, I know that some livestock owners would say that pigs are definitely not dumb. Pigs certainly show more intelligence than other animals such as cattle. Yet, maybe the question of why the animals are associated with these particular traits is less important than the more important assertion that harmful behavior can be linked to desire, ignorance, and anger, the three “poisons.” 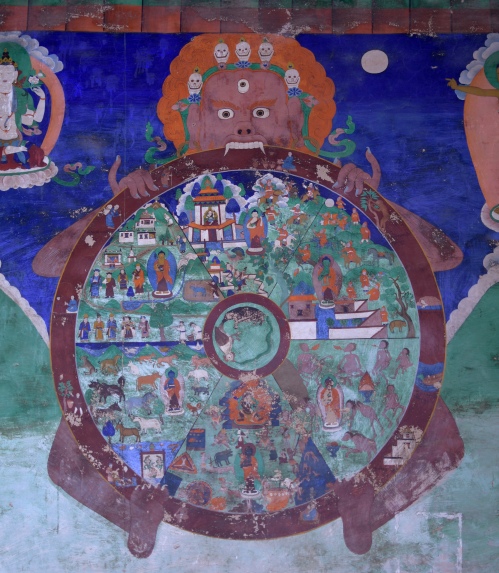 Moving beyond the inner circle, we find a ring broken into six compartments depicting various realms of life. Proceeding clockwise, at the top is the realm of the gods, the realm of humans, the realm of the hungry ghosts (those who have died, but who wander not yet reborn), the realm of the damned, the realm of animals, and, finally, the realm of the demi-gods. These realms depict various heavens and hells. Without going into too much detail, I love some of the explanations I’ve read and been told. Three realms depict some degree of happiness, the gods, the human, and the demi-gods; three realms depict some degree of suffering, the hungry ghosts, the animals, and those punished in hell. The hungry ghosts suffer from hunger and thirst, but will never be satisfied. Although possessing large bloated stomachs, they will never satisfy their craving for food or quench their thirst with drink because of their extremely narrow throats. The damned tortured by fire or ice are as interesting as the damned portrayed in Christian artists such as Bruegel or Bosch. The demi-gods and the gods also depict degrees of happiness and suffering. Because the Tree of Life has its trunk in the demi-gods realm, but its fruit in the realm of the gods, the demi-gods jealously want the fruit that isn’t theirs. The gods though, in ignorance, assume that they will live in their reign enjoying happiness forever. They can not comprehend that their existence, however long, is still limited and will come to an end. Looking upon these realms as a whole, the Tibetan Buddhist will understand that all forms of life are still bound and found within this structure of life, and that all forms of life are affected by the three destructive poisons of the inner circle, desire, ignorance, and anger.

Another important component of this large circle is the last, narrow ring. Somewhere at the top is a blind man who is the Everyman, Everyperson. For the Tibetan Buddhist, all persons are blind and fail to see the true nature of life. However, persons are not left helpless in their blind condition. Corresponding to each of the six realms, we see a figure speaking and helping the inhabitants of that realm. In Tibetan Buddhism as in other Mahayana Buddhists traditions, the six corresponding figures are Bodhisattvas, a being who renounces and delays entrance into nirvana because of compassion for those caught in suffering. 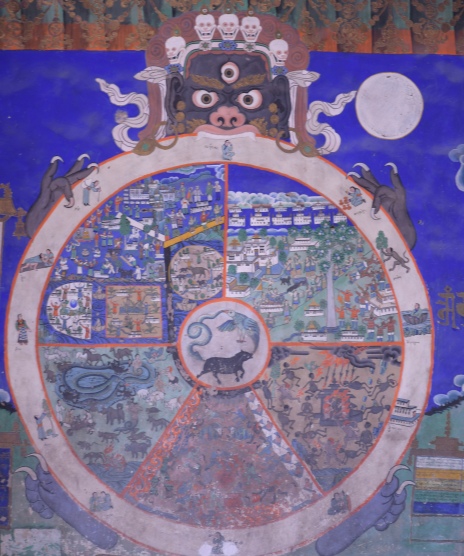 The second major component of the Wheel of Life is the figure holding this complicated set of circles and rings. Like an eagle holding its prey, Yamataka, the Lord of Death, firmly holds all that exists with the sharp claws of its four arms and legs. There is no escape from these gripping claws. As the Lord of death,Yamataka assures that no matter how long or brief a beings’ life, death comes to all. But with death, the being doesn’t escape this cycle of samsara; rather, the being is reborn in one of the six realms. Thus, the cycle of life and death continues. 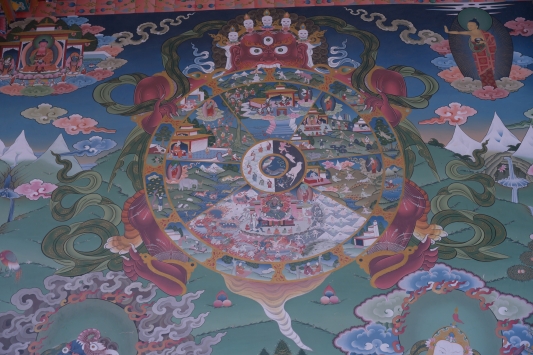 Finally there are one last set of pictorial elements. To the left is a “pure land” symbolizing liberation from the samsara cycle. To the right is the Buddha. The Buddha, pictured serene and calm with an outstretched hand, points to this “pure land,” this liberation. The Buddha is the one who has moved beyond the realm of existence into nirvana. Other than the Buddha and the few figures, the relative sparseness of this area of the mandala also symbolizes the lack of being able to state or describe what this nirvana is. It is a pictorial form of “emptiness.”

I admire the amount of detail and significance packed into the Wheel of Life. I can sense why Tibetan Buddhists admire this canonical artwork.

While I’m not an art historian, I can’t help but notice ways in which the artistry differs from some of the classic Christian medieval and renaissance artworks such as Michelangelo’s Last Judgment in the Vatican’s Sistine Chapel. Speaking comparatively, Michelangelo’s work has a narrower scope and his work is dominated by one figure. Concerning the narrower scope, Michelangelo paints only humans facing death. There are no animals nor other beings. It is humans who are consigned to hell or raised to heaven. In his depiction of these human figures, Michelangelo does not offer artistically a cause for their destruction or bliss. He leaves that absent. Michelangelo emphasizes something else. He paints human figures caught in one decisive moment. In painting this one-time event, Michelangelo paints individualized figures as expressed through their facial characteristics and varying bodily features. Michelangelo’s individualized humans contrasts with the Wheel of Life’s more generalized depictions. There is no individuality in the Buddhist depiction of the humans, the semi-gods, or the gods. This lack of individuality in the Wheel of Life corresponds to the Buddhist philosophical notion that there is ultimately no individual identity. To think that we have unique, individual identity is illusionary. The other comparative note is that Michelangelo’s work is dominated by one figure, Christ. With one arm seemingly beckoning some toward himself, and another arm pushing others away, the Christ figure actively involves himself in this moment of judgment. Besides this activity of Christ, Michelangelo’s depiction of Chris is striking and unique. Christ is young; Christ is muscular; Christ bears the marks of his crucifixion. Identified by his past actions and sufferings, Christ is surrounded by identifiable others. There is Peter with his keys; there is Paul with his book. Just as Christ retains his individuality after death, so also do others retain the distinguishing features of their own previous life as they move toward heaven or hell. Whatever their destination, Christ assigns them to one domain or the other never to be reborn again.

Obviously, there are scores of other ways Christians have imagined death and the life after death. Spain’s Burgos cathedral has in one chapel a ceiling with hundreds of babes singing or playing a musical instrument. I’m not fond of Baroque art, but okay. Or, in Georgia’s Paradise Garden, Howard Finster portrays souls flying to heaven in his rough, flat Highway to Heaven. Different and interesting if you like folk art.

The Wheel of Life mandala offers Tibetan Buddhists a pictorial narrative of samsara, of the cycle of life and death. As an outsider, I find it fascinating to try to understand its narrative and to try to find points of contact with Christian artists. Inevitably there will be basic, and irresolvable differences between Tibetan Buddhist and classic Christian depictions of life and death. If great art gains one’s attention, and forces one to think about the artistic technique or the artistry’s subject matter, then the Wheel of Life gains our attention. It gains our attention whether we agree with it or not. 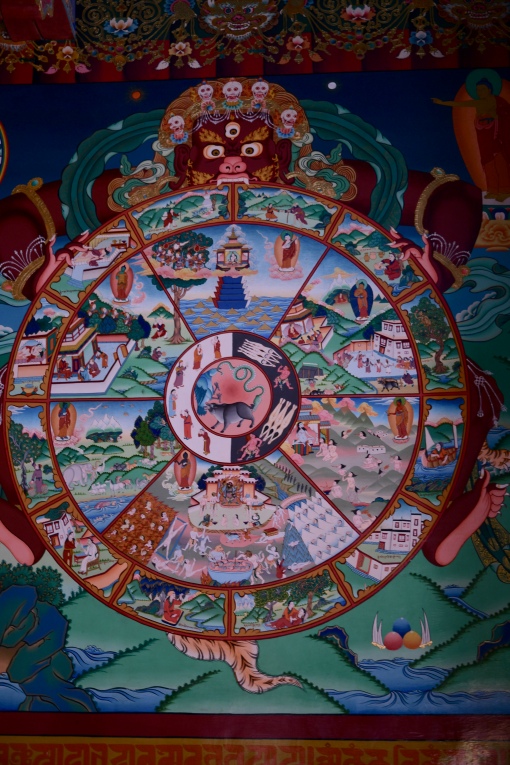