I find fascinating Jerusalems different “sacred geographies.” Jewish, Roman Catholic, Eastern Orthodox, Muslim, and Christian Protestant have overlapping “sacred geographies.” At times there are similarities. Jews pray at the “Tomb of David” as Christians peer at the large stone sarcophagus. A Christian kisses the rock where tradition has it that Jesus ascended into heaven after paying the Muslim custodian at this Mosque of the Ascension. There are also obvious differences in actual sites as well as sensibility toward those sights. While about to enter Gethsemane’s Church of All Nations, I overhear a person with a southern accent saying “Well, another Roman Catholic Church. I’m skipping this one. If you’ve seen one, you’ve seen them all.” Whether my speculation that the person was a Protestant Christian is accurate or not, that person could spend days simply visiting various Protestant Jerusalems.

Here is a bit of history again. Northern Europeans are late comers to Jerusalem. Because the Ottomans defeated the Egyptian Fatimids for control of Jerusalem (1831-1840) and because those same Ottomans defeated Russia during the Crimean War, these two Ottoman victories changed Jerusalem.  These two Ottoman victories occurred because of European help. Furthermore, the opening of the Suez Canal in 1869 also increased European interest in the region. As a result of Northern European help, the Ottomans offered privileges, called Capitulations to European governments. In particular, the French looked after the interests of the Catholics; the Russians looked after the interests of the Orthodox, and British and Prussian combined to look after Protestant interest. In particular, the Ottomans lifted the previous prohibition on non-Muslim houses of worship. New churches are constructed which change the Jerusalem skyline.

Here are some examples of British, Prussian, and Scottish churches. In 1841, the Church of England appoints a Bishop. By 1849 Christ Church is built with Michel Solomon Alexander, a former German Jew, the first Bishop. The simple soft stone interior is striking in that it resembles a synagogue. 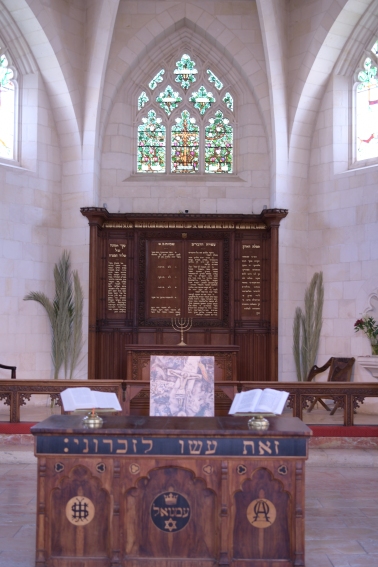 The traditional Ten Commandments, Apostles’ Creed, and the Lord’s Prayer on the wood screen behind the altar are in Hebrew; the center word on the altar “Immanuel” is in Hebrew. Christ’s Church does have Christian symbolism, there are Greek and Latin references on that same altar to Christ. When the Jordanians took over this part of the Old City in 1948, they thought that this building was a synagogue. As they prepared to destroy it like the destruction of other synagogues in the Jewish Quarter, the rector put a cross on the altar. Thus, the building was saved. Today, Christ Church building holds various services among which is a Messianic Jewish congregation.

I stay for some of my visit at St. George’s Cathedral Guesthouse. As I’ve spent a month with students at Oxford University, I feel right at home. Built between 1891-1898, St. George’s Cathedral has the same Gothic architecture. However, while I hear plenty of British English, the worship services also include Arabic. The Cathedral’s Canon tells me that over thirty-five clergy of the Diocese are Palestinian Christians.

The Prussian Protestant structures also date from this period. In 1869, the Ottoman Sultan gives land to the Kaiser for attending inauguration of the Suez Canal. As a result, the Kaiser builds the Lutheran Church of the Redeemer. Not only is it the second Protestant church in Jerusalem, but it is probably less than a hundred yards from the Church of the Holy Sepulchre.

In the lefthand side of the photo, the Church of the Redeemer includes a tall tower which is a popular climb for people wanting to view the Old City and beyond. Between 1907-1914, Augusta Victoria Hospital and the Lutheran Church of the Ascension on Mt. Olive are built. Two noteworthy features of the later buildings are that many of the building materials actually came from Germany (except the cement) and that these were the first buildings to have electricity! 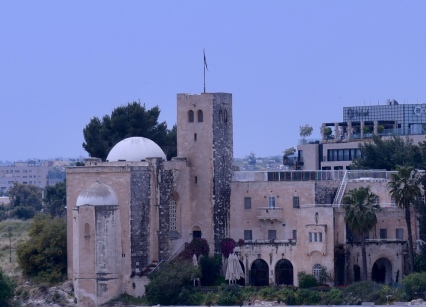 Finally, the Scottish also built the Church of St. Andrew between 1927-1930. This small church sits outside the southwest corner of the Old City. The church seems to blend into the surrounding environment. This is no accident, rather it is intentional. Sir Ronald Storrs, the military governor during the first part of the British Mandate, and his “city planner,” decided to “preserve the medieval aspect of the city in its natural state.” Buildings had to use almost exclusively local stone rather than iron or concrete. Buildings had to be limited in height rather than be tall, high-rise buildings. They also cleared the land around the Old City walls in order to create “green space” and allow a view of those walls. Thus, the Church of St. Andrew blends into its surroundings with only a small tower and dome.

In more recent years, Protestant “sacred geography” has had some additions. Since all of my lodging has been north of the Damascus Gate, I’ve passed the First Baptist Bible Church and the Church of the Nazarene. I suspect that neither of these churches shape the geography of visitors to Jerusalem.

Besides these two small churches, there are two other notable para-church structures, the Garden Tomb and the Jerusalem Prayer Center.

The Garden Tomb is the most impressive addition to Protestant’s “sacred geography.” The history of Protestant criticisms of Roman Catholic piety have been documented by many scholars. Here is Claude Condor’s words from 1878.

“There are those who would willingly look upon it [ The Church of the Holy Sepulchre] as the real place of the Saviour’s Tomb, but I confess that, for myself, having twice witnessed the annual orgy which disgraces its walls, the annual imposture which is countenanced by its priests, and the fierce emotions of sectarian hate and blind fanaticism which are called forth by the supposed miracle, and remembering the tale of blood connected with the history of the Church, I should be loath to think that the Sacred Tomb had been a witness for so many years of so much human ignorance, folly, and crime.” 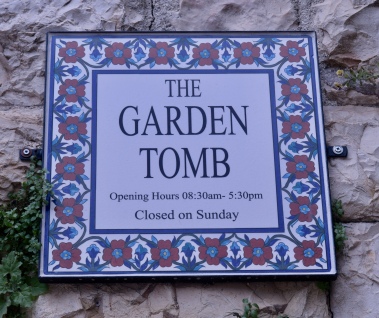 In 1894, the Garden Tomb Association was formed. Its website describes its origins in the following way:

“According to the scriptures, Jesus was crucified in a place named “the Skull” (Golgotha in Aramaic). In the mid-19th century, several Christian scholars suggested that the rocky escarpment, which can be viewed from the garden, marked the place of the Messiah’s crucifixion. They noted its proximity to a main city gate, its association with executions according to local tradition, and its physical resemblance to a skull.”

Over the years, various Protestants from numerous denominations, from Baptist to Assemblies of God, have invested time, energy, and money in creating an alternative to the Church of the Holy Sepulchre. 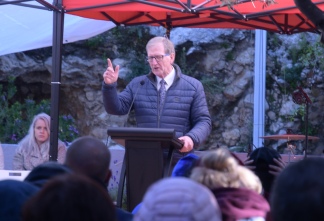 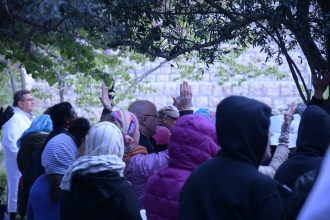 On this past, cold Easter morning, the preacher was an Assembly of God pastor. As I have been present during two different Easter sunrise services, I can say that it does draw a large and enthusiastic crowd of worshippers.

The Jerusalem Prayer Center is located in an older historic Ottoman building. While I’m not going to tell its history, I need to mention that it is associated with Horatio Spafford, a wealthy Chicagoan who lost his fortune in the 1871 Chicago fire and his four daughters who drowned as the ship taking them to Europe sank. As he was not on the ship because he was taking a later ship, he survived to write the  hymn“It is Well with My Soul.” In 1881, he and others started the American Colony in Jerusalem. After various owners and uses, their home opened as  the “Prayer Center” in 2008. Their website claims some 15,000 yearly visitors from over 100 countries.

While they have been late-comers to Jerusalem, Protestant Christians have created their own “sacred geography.” One more layer to the fascinating layers of Jerusalem!