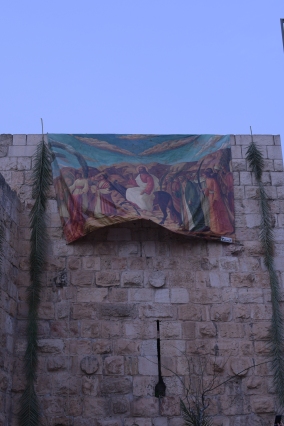 As a traveler to Jerusalem, I spend an inordinate amount of time in churches. However, since I’ve been here for two different Holy Weeks this year because western and eastern liturgical calendars disagree, I have to display some of the “Christians on the Streets” photos I’ve collected. 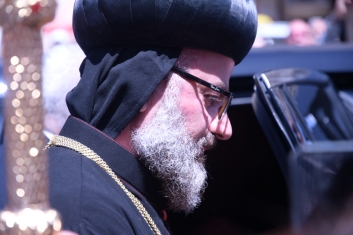 The arrival of the Syriac Orthodox patriarch included a greeting by representatives of other denominations as well as the Syriac Pipe and Drum Corps. As in India, the British left all sorts of legacies in the areas they ruled. 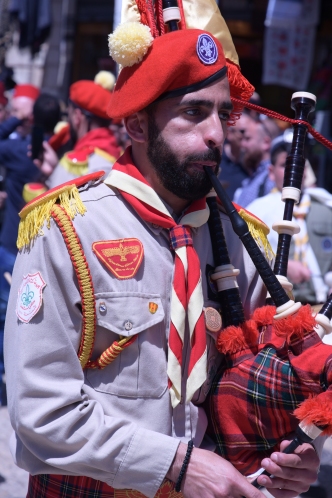 I decided to find a vantage point for the first Palm Sunday. Having previously walked with thousands of people following the Franciscans, I knew that I’d have sufficient opportunity to join the procession whenever I wanted. I joined an AP photographer from France. 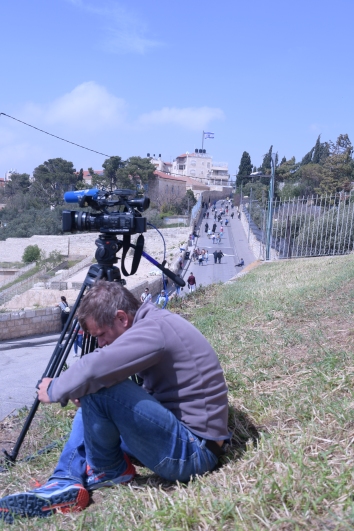 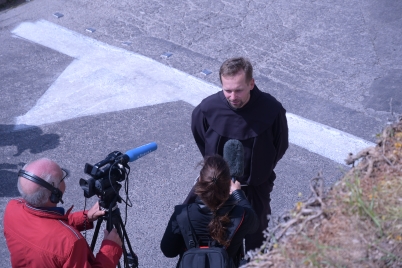 As the procession passed, I felt like a kid watching my Shriner, trombone-playing father, march in some hometown parade as a young kid. I saw numerous groups with musicians; I even saw, happily, several individuals in wheelchairs joining the fun. 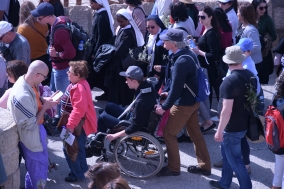 The western calendar’s Good Friday I stayed at Ecce Homo. As we perched on their steps, I and several others faced Israeli police and Israeli Defense Forces who wanted us to move. Fortunately, the manager and a former Palestinian but now USA citizen argued with them. The USA citizen asked “Do you own a house? Can you sit on your steps? Of course, you can! Israeli law allows us to sit on these steps.” Although we got glares from the police, they did not force us to move. 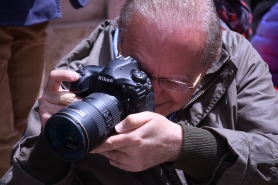 In fact, within thirty minutes a hundred people lined the narrow Via Dolorosa waiting for the Good Friday procession to begin. 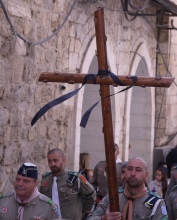 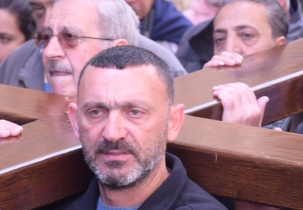 All sorts of people passed by, men carrying crosses. 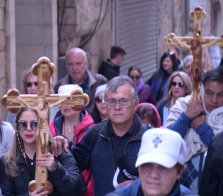 The devout carrying their own cross and singing.

A young child and his parrot even were part of the procession. Even Jesus made it, but without his donkey.

The last public display was the Eastern Orthodoxy’s Holy Fire ceremony. In this ancient ceremony, Eusebius records that in 182 the Bishop in Jerusalem realized that the lamps for Easter were not filled with oil. There was no oil available. Undeterred, he ordered the lamps to be filled with water and lit. The candles burned! 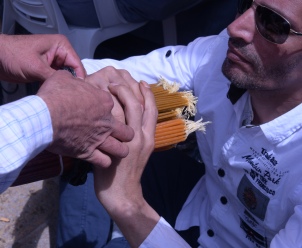 I couldn’t enter the Old City, let alone the Church of the Holy Sepulchre. As a result, I joined a few thousand of my new, best friends outside Jaffa Gate. As they waited for the Holy Fire, most people prepared their beeswax candles. While I had one wimpy candle given by the man standing next to me, most of the people had packets of candles. They would take three or four of these packets and bind them together so that they had the symbolic “thirty-three” candles forming a large torch.

Some of them sang as they waited.

After standing for three hours, listening to Coptic Christians from Egypt and Russian Orthodox from Russia, and after several false shouts of “Fire, Fire,” we finally saw the real fire. The Coptic next to me said “Push.Push” as he tried to get closer to those who were lighting their candles. All of these adults then soon became kids playing with fire.

Christians have “taken to the streets” for various reasons. In Jerusalem, the reason is often connected to a procession celebrating a significant event of the Christian faith.